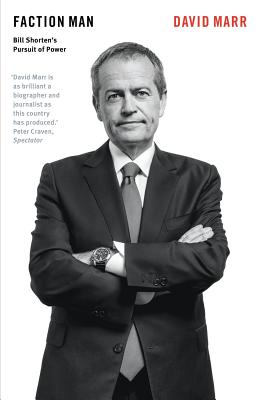 In Faction Man, David Marr traces the career of a Labor warrior. In dazzling style, he shows how this brilliant recruiter and formidable campaigner mastered first the unions and then the party in pursuit of an ambition he set himself in childhood: to be Prime Minister of Australia.

Bill Shorten is now a contender. But where do his loyalties lie? Is he a defender of Labor values in today's Australia, or is he a shape-shifter, driven entirely by politics? And does this product of the old world of union intrigue have what it takes to defeat Malcolm Turnbull and lead the country?

Marr reveals a man we hardly know: the Napoleon of the factions, a virtuoso with numbers and a strategist of skill who Labor has backed to return the party to power.

David Marr is the author of Patrick White: A Life, Panic, The High Price of Heaven and Dark Victory (with Marian Wilkinson), as well as five bestselling Quarterly Essays. He has written for the Sydney Morning Herald, the Age, the Saturday Paper, the Guardian and the Monthly, and been editor of the National Times, a reporter for Four Corners and presenter of ABC TV's Media Watch.