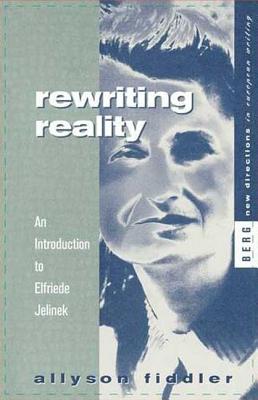 
Not On Our Shelves—Ships in 1-5 Days
(This book cannot be returned.)
This first systematic study of the controversial Austrian feminist writer, Elfriede Jelinek, offers an extensive survey and analysis of Jelinek's major texts and a discussion of the literary techniques which characterise her writing. Background contextual information on historical and literary developments is provided to help the reader gain a better understanding of Jelinek's writing and her place within current international debates on feminism and literary theory.
Allyson Fiddler Lecturer in German, University of Lancaste

"This study is lucidly written and displays a convincing balance between a close textual analysis and the integration of Jelinik's writing into its socio-political and theoretical context." --Forum for Modern Language Studies

"This is an important critical work that uses modern feminist approaches sensibly to reveal the texts of one of the most prominent contemporary writers in German as serious contributions to both literature and social awareness. As the first in a new series 'New Directions in European Writing' it sets a high standard." --MLR

"...providing a valuable introduction to J.'s biography, her approach to feminism, the broad development of contemporary Austrian literature, and the critical reaction to her work." --The Year's Work in Modern Language Studies

"This is the first monograph dedicated to Jelinek in English, and will doubtless prove an essential undergraduate introduction to this most outspoken and yet paradoxiclly elusive of writers ... This is the first in a new series of volumes to be published by Berg, which aims to introduce New Directions in European Writing to an undergraduate audience. It is a stimulating and exciting beginning." --Austrian Studies