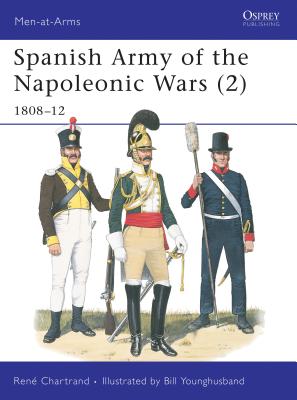 The French 'invasion by stealth' of her uneasy ally Spain, and the final proclamation of Napoleon's brother Joseph as king, led to the spontaneous outbreak of a war of resistance in May 1808 that would rage for six years. Despite Napoleon's clear advantage, the Spanish Army was never completely destroyed, their stubborn resistance typified by epic sieges at Zaragoza and Gerona and nationwide guerrilla warfare. The second of three volumes, this book examines the history, uniforms and equipment of the Spanish Army who, with the help of guerrillas and 'armed peasantry', stood up to Napoleon's Grand Army against all odds.
René Chartrand was born in Montreal and educated in Canada, the United States and the Bahamas. A senior curator with Canada's National Historic Sites for nearly three decades, he is now a freelance writer and historical consultant. He has written numerous articles and books including almost 30 Osprey titles. He lives in Gatineau, Quebec, with his wife and two sons.