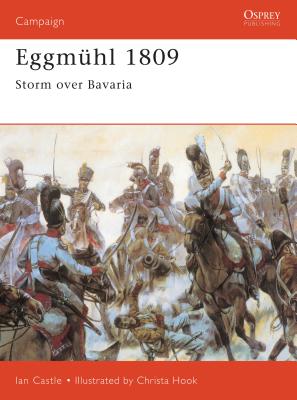 Osprey's Campaign title for the Battle of Eggmuhl of the Napoleonic Wars (1799-1815). In the Spring of 1809, the Austrian army, buoyant and full of new-found patriotic fervour, rolled across the frontier with Bavaria. The time had come to exact revenge for the humiliating defeat suffered at Austerlitz. But ten days later, harassed by ceaseless rain, they were streaming back from the Abens river with Napoleon in hot pursuit. Napoleon had not been in the front line when Austria had launched its campaign - and the French and their German allies had blundered backwards and forwards across the Bavarian countryside. But, with the appearance of Napoleon, Archduke Charles lost the initiative. Based for the first time upon the Austrian primary sources, this title takes the reader through the various clashes of this significant campaign.
CHRISTA HOOK began her illustrating career in 1986, after studying under her father Richard Hook. Her work has featured extensively in the worlds of publishing and television. She has established herself as one of Osprey's most popular artists, having illustrated multiple series titles. Her illustrations combine the historian's attention to detail with the artist's sense of drama and atmosphere, and they are sought after by collectors worldwide. Christa lives and works in East Sussex, England.