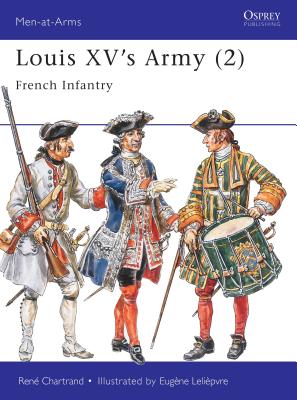 In Louis XV's army the classification of 'French' infantry denoted troops recruited from men born and raised in France. These regiments were called, naturally enough, infanterie francaise as opposed to the mercenary 'foreign' infantry recruited elsewhere. Making up the bulk of the army, all officers and men were to be of the Roman Catholic faith, the official state religion. Regimental recruiting parties went to towns and villages looking for likely young volunteers, inducing them to enlist with the usual promises – quick money, fast women, good wines and great glory.
René Chartrand was born in Montreal and educated in Canada, the United States and the Bahamas. A senior curator with Canada's National Historic Sites for nearly three decades, he is now a freelance writer and historical consultant for cinema and historic sites restorations. He has written numerous articles and books including over 20 Osprey titles and the first two volumes of Canadian Military Heritage. Also a student of wines, he currently lives in Hull, Quebec, with his wife and two sons.