101 Ways to Win an Election (Paperback) 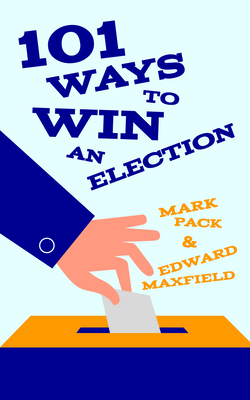 101 Ways to Win an Election (Paperback)


Special Order—Subject to Availability
Ever wanted to get a better deal for your community? Ever watched politicians and thought 'I could do a better job'? This book reveals the secrets and skills you need to take the first step to power - getting elected. Written by two experienced political insiders, it is a breezy, accessible grass-roots guide to running an election campaign at any level. It draws on successful tactics from around the world and presents the lessons in a digestible format - 101 short chapters that together will tell you how to win an
election. Among the many lessons you will learn along the way are why you must learn to hate trees, why a picture is NOT worth a 1,000 words, why you must always have more people than chairs, why the best form of advertising is also the very worst, and why communicating is like cooking.
Mark Pack is Head of Digital at MHP Communications, one of the top ten communications consultancies in Europe. He was previously Head of Innovations at the UK Liberal Democrat Party, now in coalition government, and ran the party's internet general election campaigns. Edward Maxfield is secretary for the Liberal Democrat European Group. Both have worked as campaign staff in the UK, Spain, Australia and Canada and have worked extensively with US campaigners and consultants.