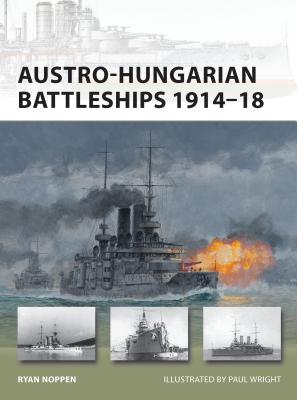 This is book number 193 in the New Vanguard series.

Despite imperial politics, a modern Austro-Hungarian battleship fleet was built and contested Italian dominance of the Adriatic and the Mediterranean through a series of daring naval raids that netted greater success than anything the German High Seas Fleet accomplished in the North Sea.

The nineteenth century saw the assertion of Habsburg sea power over the Adriatic from the Austrian inheritance of the Venetian fleet in 1797 to Rear Admiral Wilhelm von Tegetthoff's stunning victory over a superior Italian force at the Battle of Lissa in 1866 to the gradual creation of a modern battle fleet beginning in the 1890s. Austria-Hungary did not have an overseas empire; its empire lay within its own boundaries and the primary purpose of its navy until the beginning of the twentieth century was the defense of its coastline. As its merchant marine dramatically grew in the late nineteenth century, Austro-Hungarian admirals believed that the navy should take a more proactive policy of defense, defending not only the coastline but the greater Adriatic and even the Mediterranean waters which the empire's merchant ships plied. The 1890s saw the beginning of a series of naval building programs that would create a well-balanced modern fleet. Cruisers were constructed for the protection of overseas trade and for "showing the flag" but the decisive projection of Austria-Hungary's commitment to control the Adriatic was the construction of a force of modern battleships. Compared to the British, French, Germans, and even Italians, the Austro-Hungarians were relative latecomers to the design and construction of battleships. Austro-Hungarian naval policy tended to be reactionary rather than proactive; its admirals closely followed Italian naval developments and sought appropriate countermeasures even though the two nations were tenuously bound together by the Triple Alliance pact of 1882. Despite the naval arms race throughout Europe at the time, the navy had difficulty obtaining funds for new ships as the Hungarian government was reluctant to fund a fleet that principally served the maritime interests of the ethnically German portion of the empire. The difficulties experienced in battleship funding and construction mirrored the political difficulties and ethnic rivalries within the empire. Nevertheless by August of 1914, the Austro-Hungarian fleet had a force of nine battleships, three pre-dreadnoughts, and one dreadnought (three more in the final stages of construction). This book will survey the five classes of Austro-Hungarian battleships in service during the First World War.

Ryan K. Noppen is a military author and consultant originally from Kalamazoo, Michigan and holds a Master of Arts degree in European History from Purdue University. He has worked as a naval and aviation subject matter expert on projects for the US Navy, taught college courses in military history, and has served as the headmaster of a Classical grammar school. A scholar of Dutch, German, and Central European military history, he has published a major history of Dutch air power and has written several titles for Osprey. He lives in California, USA.

Paul Wright has painted ships of all kinds for most of his career, specializing in steel and steam warships from the late 19th century to the present day. Paul's art has illustrated the works of Patrick O'Brian, Dudley Pope and C.S. Forester amongst others, and hangs in many corporate and private collections all over the world. A Member of the Royal Society of Marine Artists, Paul lives and works in Surrey.

“This book is useful on several levels. The ship modeler will find new topics and colour schemes in it. The novice to the field will find Noppen's work a useful introduction to the subject and the bibliography a guide to further study. The expert can use it as a handy brief reference work. Noppen's work is a long-overdue and worthy tribute to long-forgotten sailors and warships. It is recommended.” —The Northern Mariner (January 2013)

“In this latest edition of Osprey's New Vanguard series, author Ryan Noppen tells us the story of the big ships of the Austro-Hungarian navy. From their inception through the building of all five classes of ships, we can see how each subsequent design was an improvement over the ones before it. Half of the book is devoted to the operational record of these ships and the various battles in which they were involved. True, most of these actions were against high value shore targets, but they performed their missions as expected. A couple were destroyed by Italian torpedo boats, both occasions being ones where the laxity of security was the cause for loss. Included in this book are some superlative period photographs of the men and ships. This is additionally enhanced by the excellent art work of Paul Wright. It is a well done addition to the series and tells the story of the interesting, and rarely covered capital ships.” —Scott Van Aken, Modeling Madness (October 2012)