Bob Marley and the Golden Age of Reggae (Hardcover) 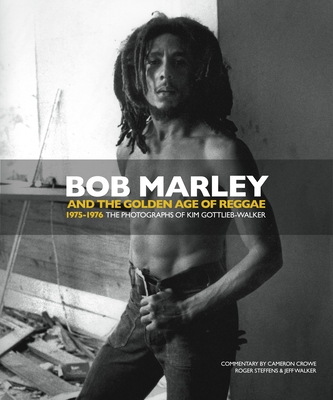 Bob Marley and the Golden Age of Reggae (Hardcover)


Not On Our Shelves—Ships in 1-5 Days
"’Reggae got soul,’ Toots Hibbert sang in one of his best-known songs, and
Kim Gottlieb-Walker's remarkable photographs coax that soul out of shadow
and light. Her images from Jamaica capture the rough environment that shaped
and challenged these artists, and the unquenchable joy that filled their
music. They're the next-best thing to listening.” — Richard Cromelin

During 1975 and 1976, renowned underground photo-journalist Kim Gottlieb,
and her husband, Island publicity head Jeff Walker, documented what is now
widely recognized as the Golden Age of reggae. Over two years of historic
trips to Jamaica and exclusive meetings in Los Angeles, Kim took iconic
photographs of the artists who would go on to define the genre and captivate
a generation.

Bob Marley and the Golden Age of Reggae features candid and intimate
photographs of all of the musicians, artists and producers who brought the
reggae sound to the international stage, including Peter Tosh, Bunny Wailer,
Toots Hibbert, Burning Spear, Jacob Miller, Third World, Lee “Scratch” Perry
and, of course, Bob Marley. Kim’s photographs include never-before-seen
performance shots, candid behind-the-scenes footage of Bob’s home in
Jamaica, and exclusive records of key moments in reggae history, such as
Bob’s first US television appearance, the historical Dream Concert with
Stevie Wonder in Jamaica, and Bob meeting George Harrison backstage at the
Roxy in 1975.

Acclaimed rock journalist and director Cameron Crowe (Almost Famous)
introduces this volume with a rousing foreword describing the time he
accompanied Jeff and Kim to Jamaica to witness the burgeoning music scene
there. Reggae historian Roger Steffens writes lucidly about the significance
of those early years in reggae, and describes the pivotal moments documented
in Kim’s photographs, many of which have not been seen in over 30 years, and
many more of which have never been released to the public. Intimate and
revealing, Bob Marley and the Golden Age of Reggae is a rare and beautiful
record of one of the most exciting moments in music history, told through
the photographs of a true artist.

She lives with her husband, Jeff, in Los Angeles.
"A fantastic collection of rare Bob Marley images." -- Crave Online

"The photography is excellent throughout, with a combination of live, staged and candid shots beautifully taken by Kim Gottlieb-Walker." -- All Gigs