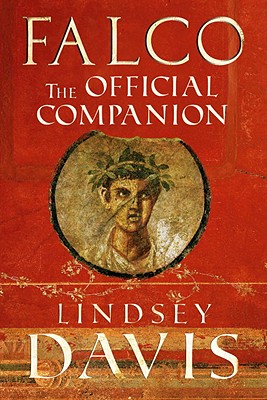 
Special Order—Subject to Availability
A must-have companion to the acclaimed series about the Imperial private eye As the girl came running up the steps, I decided she was wearing far too many clothes . . .  So, in 1989, readers were introduced to Marcus Didius Falco, the Roman informer, as he stood on the steps of the Temple of Saturn, looking out across the Forum, and now, 20 years and 20 books later, Falco fans want a companion volume. Only here will readers learn the author’s private background, including her descent from a failed assassin and how atheism improved her knitting. Here too are the real glories and heartache involved in research and creation—why the baby had to be born in Barcelona, which plots evolved from intense loathing of management trainees, what part a thermal vest played in the iconic Falco’s conception. Enlightening quotations from the Falco books and eminent sources: Juvenal, through Chandler, to 1066 and All That are also included.
Lindsey Davis's bestselling Marcus Didius Falco mystery series features laid-back First-Century Roman detective Falco and his partner Helena Justina, plus friends, relations, pets and bitter enemy the Chief Spy. She is also the author of Rebels and Traitors. She has won the CWA Historical Dagger, the Dagger in the Library, and a Sherlock for Falco as Best Detective awards. She has been Honorary President of the Classical Association and is a past Chair of the Crimewriters' Association. In 2009 she was awarded the Premio de Honor de Novela Historica by the Spanish City of Zaragoza for her career as a historical novelist.
“Davis makes Rome live.”  —Washington Post Book World

"What makes Davis's long-standing series so indelible is the expert blend of Falco's wisecracking observations and crazy family life with some masterly suspense. . . . The mystery is intricately plotted, the characters are well drawn, and Falco is as engaging a protagonist as ever, still tough but wiser and more reflective, too. Another winner for historical mystery fans."  —Library Journal on Alexandria

“Davis’s vision of everyday life in the Roman Empire is superb. I haven’t read historical fiction this good since I, Claudius by Robert Graves and The Persian Boy by Mary Renault.”  —Detroit Free Press on Shadows in Bronze