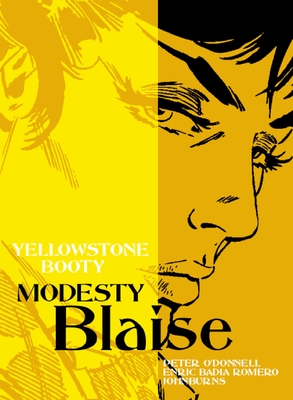 
Special Order—Subject to Availability
The dark underworld of espionage and crime is lit up by the fatal charms of the gorgeous Modesty Blaise — high priestess of pulp crime and goddess of cult thrillers!

In this latest volume, Modesty faces off against a group of racketeers who have eyes on valuable Native American treasure in ‘Yellowstone Booty’; in ‘Idaho George’, Modesty and a con man are imprisoned by a gang who want to turn fools gold into the real thing; and in ‘The Golden Frog’, learn about the secret origin of her fighting skills!

Featuring brand new story introductions by Modesty creator and bestselling author Peter O’Donnell, plus exclusive behind-the-scenes paintings and rarely seen artwork by John Burns, this latest addition to the Modesty Blaise library is not to be missed!
Peter O’Donnell has written in many media, but since he created Modesty Blaise, which was first published in 1963, it has achieved international success. There has even been a film and a TV version of the character.

Enric Badia Romero has worked for 2000 AD and is the long-term artist of Axa.

“I fell in love with Peter O'Donnell's astonishing heroine, Modesty Blaise, when I was twelve... As I grew up I also came to admire the craft with which she was brought to the world, the lunatic skills of her creator, and, last of all, I found the comic strips, where she started, and discovered just how much of what I loved about Modesty was there from the beginning...” — Neil Gaiman