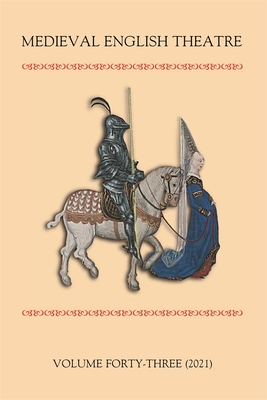 
Special Order—Subject to Availability
The ludic element of drama in the Middle Ages - or drama with early subject matter - is here to the fore. Medieval English Theatre is the premier journal in early theatre studies. Its name belies its wide range of interest: it publishes articles on theatre and pageantry from across the British Isles up to the opening of the London playhouses and the suppression of the civic mystery cycles, and also includes contributions on European and Latin drama, together with analyses of modern survivals or equivalents, and of research productions of medieval plays.
This edition combines, perhaps unexpectedly, royalty and games. Games of all kinds, from jousting and "Christmas games" to those usually associated with children, are shown, it is suggested, to be more than they at first appear. Apparently run-of-the-mill entertainments, when presented to the court by the Londoners, by the court to a visiting emperor, or by the retainers of royalty and nobility to the general public for commercial gain, turn out to have unexpected political resonances; while the potential underlying sadism of children's games gains a horrific immediacy when diverted to the torturing of Christ. Even today, the musical SIX says a great deal more about royalty and role-playing than initially might appear, especially when set against eye-witness accounts of the first meeting of Anna of Cleves with Henry VIII, and what modern novelists have made of it . In the process we learn a great deal more about the detail of these games, from the maskerie costumes of James VI and Anna of Denmark to the elaborate fantasy challenges of the jousters in 1400/1401, which incidentally suggest that fourteenth-century court culture, whose language was Anglo-French, is a major missing link in the history of what is usually treated as purely English literature. Contributors: Philip Bennett, Philip Butterworth, Sarah Carpenter, Elisabeth Dutton, James Forse, Gordon Kipling, Michael Pearce, Meg Twycross.