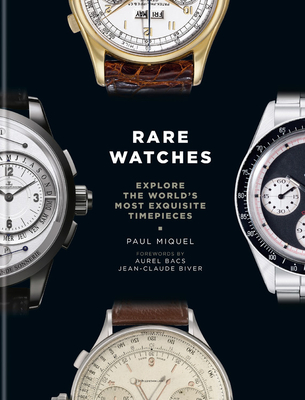 
Not On Our Shelves—Ships in 1-5 Days
A beautifully packaged look at some of the world's most sought-after timepieces, with specially-commissioned photography in collaboration with Christie's auction house

Rare Watches features more than fifty of the most unusual watches in the world, including incredible one-off models and collector's editions. From watches that have set new records in auction houses, to feats of modern technology and engineering, via iconic models worn by figures such as Elvis and James Bond, this book appeals to professionals, collectors and amateurs alike.  The photography in this book was organized in collaboration with Christie's auction house, displaying some of the rarest, most expensive and desirable watches ever. Complete with slipcase, this is a beautifully packaged look at some of the world's most sought-after timepieces.
Paul Miquel is editor-in-chief of Sport& Style, the lifestyle magazine of French sports daily L'Equipe. He was previously the timepiece columnist at GQ, and has acted as a consultant for a number of Swiss watch manufacturers.
Aurel Bacs was head of the watch department at Christie's before co-founding Bins & Russo, a company that provides expertise to watch collectors and manufacturers. He currently works as an auctioneer at Phillips auction house.
Jean-Claude Biver is chairman of Hublot, and runs TAG Heuer as well as the LVMH Watches division. He has contributed to the success of many brands and has revolutionized the Swiss watch industry.