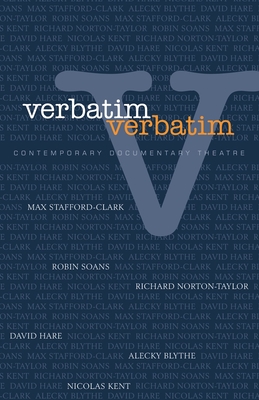 Five specially commissioned discussions of verbatim theatre - in the words of the people who make it.

'What a verbatim play does is flash your research nakedly. It's like cooking a meal but the meat is left raw.' - Max Stafford-Clark Plays which use people's actual words as the basis for their dramaare not a new phenomenon. But from the stages of national theatres to fringe venues and universities everywhere, 'verbatim' theatre, as it has come to be known, is currently enjoying unprecedented attention and success. It has also attracted high-profile criticism and impassioned debate. In these wide-ranging essays and interviews, six leading dramatists describe their varying approaches to verbatim, examine the strengths and weaknesses of its techniques and explore the reasons for its current popularity. They discuss frankly the unique opportunities and ethical dilemmas that arise when portraying real people on stage, and consider some of the criticisms levelled at this controversial documentary form. 'The intention is always to arrive at the truth.' - Nicolas Kent
Richard Norton-Taylor was born in 1944 and joined the Guardian in 1975. Since then, he has investigated official secrecy, behind-the-scenes decision-making in Government, and the activities of the security and intelligence services. His works for stage include 'Half the Picture' (an adaptation of the Scott 'arms to Iraq' enquiry), 'Nuremburg', 'Srebrenica' and 'The Colour of Justice'.