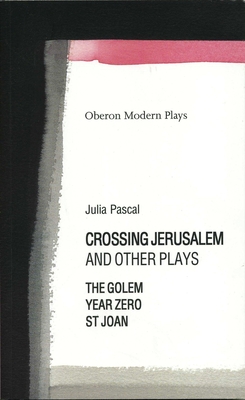 Crossing Jerusalem describes 24 hours in the life of an Israeli family in March 2002, as they cross Jerusalem at the beginning of the latest intifada. Over this 24 hours, personal and political history burst into the present. A complex family drama explodes in the most politically tense city in the world. The Golem is inspired by the medieval Yiddish legend. This story, set in Prague, explores what happens when a monster is contructed to defend his community. This version is written for children. Year Zero is a bitter-sweet satire inspired by interviews conducted in the north of France, where Communists, Gaulists, collaborators and those who were children during the 1940s, provided the original source of material. The play exposes the day to day experiences of the men and women who suffered or profited from those zero years. Joan of Arc has, over five centuries, proved an irresistible and enduring icon for an extremely diverse group of people both within and without France. St Joan is a satire based on a Jewish Black Londoner who dreams she is the legendary Catholic Saint.
Julia Pascal's plays are edgy personal and political dramas often connected to Jewish culture and history. From British collaboration with the Nazis on the Channel Islands to current Palestinian-Israeli conflicts, they explore the complexity of the most highly-charged conflicts of our age. These texts range from dance-theatre Expressionism to naturalism and often offer large roles to women which challenge stereotypes. The plays have an international dimension. Year Zero is set in Vichy France. St Joan in London and Paris. The Dybbuk takes place in Eastern European ghetto. Crossing Jerusalem is 24 hours in the life of a Jerusalem family. Honeypot is a spy story situated in Stockholm and Paris. Styles range from cabaret to thriller. And always there is sharp dialogue that is often darkly funny as well as disturbing. The plays have been staged in the UK, the USA, Belgium, France, Germany and Sweden.