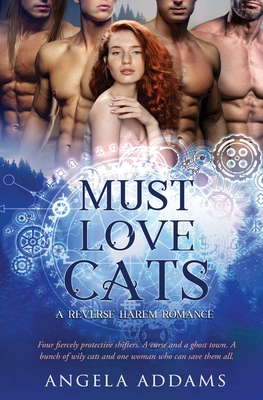 Four fiercely protective shifters. A curse and a ghost town. A bunch of wily cats and one woman who can save them all.

Lucki Collins has landed the job of a lifetime-Cat Keeper of Lady Clover's Cat House in Weeping Falls, Alaska.

Lucki discovers early on that Weeping Falls is cursed and that the cats she's there to care for are the townspeople, who must abide by the cycle of the sun and moon-taking cat form during the day and human form at night. They are magical creatures known as 'familiars', who can enhance the powers of a witch considerably, the very thing that puts them in danger.

Lucki meets her protectors-Reuben, a bear shifter, Wren, a wolf shifter, Ben, a hawk shifter, and Julian, a lion shifter-who must not only keep her and the cats safe, but also somehow convince her to bond with them. Their magical bond is the only thing that will give Lucki control over her powers, which are necessary to defeat Angelica, a sorceress who wants to capture all the cats and use them for her evil goals. Lucki hasn't had the best experience with love, but rather than leave the men hopeless, she offers to help them break the curse by another means.

Things don't go according to plan, and Lucki is left with the challenge of overcoming her past and setting aside her fears. If she can believe in herself and put her faith in love once again, she might just be able to triumph over evil and save the people she has come to deeply care about in Weeping Falls.