News and How to Use It: What to Believe in a Fake News World (Paperback) 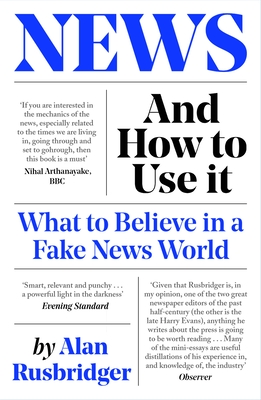 News and How to Use It: What to Believe in a Fake News World (Paperback)


In Stock—Click for Locations
Alan Rusbridger was Editor-in-Chief of Guardian News & Media from 1995 to 2015. He launched the Guardian in the US and Australia as well as building a website which today attracts more than 100 million unique browsers a month. The paper's coverage of phone-hacking led to the Leveson Inquiry into press standards and ethics. Guardian US won the 2014 Pulitzer Prize for public service for its leading global coverage of the Snowden revelations. He is the author of Play It Again and Breaking News. He lives in London and Oxford, where he is Principal of Lady Margaret Hall and chairs the Reuters Institute for the Study of Journalism. @arusbridger arusbridger.com