Caviar and Sausages: Arsenal in the Time of Wenger (Paperback) 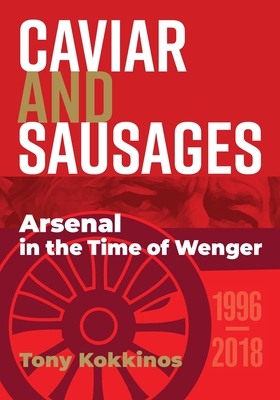 Caviar and Sausages: Arsenal in the Time of Wenger (Paperback)

"This is a beautifully-produced book forensically recounting the Wenger years using a nice mix of graphics and anecdotes. One for any Arsenal fan." Arsenal legend Alan Smith.

"If you eat caviar every day, it's difficult to return to sausages." Ars ne Wenger, November 1998.

Caviar and Sausages takes football fans from Ars ne Who? in 1996 to Wenger Out in 2018 - a revolutionary era for Arsenal Football Club and English football. Tony Kokkinos uniquely breaks down Ars ne Wenger's 22 years into three stages - the Glory Years, the Austerity Years and the Stagnating Years.

Unique colourful infographics dissect the key aspects of a revolutionary era including:

Caviar and Sausages is a must-read for supporters who witnessed some of the best football and players the English game has ever seen or are discovering Arsenal's most iconic era for the first time.