A Fine Corps and Will Serve Faithfully: The Swiss Regiment de Roll in the British Army 1794-1816 (From Reason to Revolution) (Paperback) 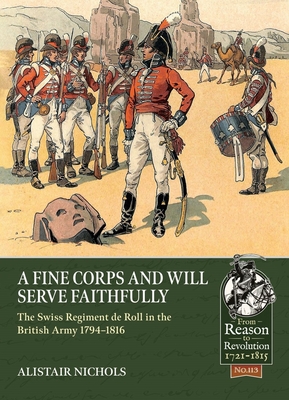 A Fine Corps and Will Serve Faithfully: The Swiss Regiment de Roll in the British Army 1794-1816 (From Reason to Revolution) (Paperback)


Not Yet Published—Pre-Order Now
In the first years after Revolutionary France declared war in 1793, Britain scrambled to raise forces at home and abroad. One source was officers and men from Switzerland who had previously served the French monarchy. They were experienced soldiers who had had their employment curtailed, often after having been subjected to the hostility of the partisans of the revolution. However, the confederation of cantons, allies, and territories that then formed Switzerland had to be wary of upsetting France, their powerful and increasingly bellicose neighbor.

Nevertheless, through a network of supporters and sympathizers in Switzerland and elsewhere, a regiment was formed in 1794 for British service. Its first destination was Corsica but circumstances forced it to take a circuitous route from Southern Germany through Italy before embarking. Active service on the island came at a cost, and was followed by postings to Elba and Portugal. As British strategy and war aims evolved in the increasingly important Mediterranean theater, the Regiment de Roll was sent to Menorca. Involved in a number of expeditions, it went with Abercromby to Egypt and took a significant role in the victory outside Alexandria on 21 March 1801.

Service continued in the Mediterranean theater at Gibraltar, during the epidemic of 1803, and then Sicily. The regiment fought in Egypt during the unfortunate 1807 campaign. Detachments then went on to serve in Italy and in the capture of the Ionian Islands. In the latter stages of the Napoleonic Wars the regiment was used to provide reliable elements to garrisons and fighting forces throughout the region from the Adriatic to Eastern Spain. Detachments fought at Castalla and the Col d'Ordal in Spain in 1813, marched across Northern Italy to Genoa in 1814, and arrived in Naples in 1815 to help prevent Murat seizing power. The regiment's Swiss soldiers finally returned home in 1816 after de Roll's was finally disbanded.

Through the use of a variety of primary documents including official reports, correspondence and lists, and private letters, as well as journals and other material, the story of the Regiment de Roll is told. It is set in the Mediterranean theater which, overshadowed by that of the Iberian Peninsula, is perhaps is less familiar to readers. So, the wider events as the conflict progressed in the theater are described to explain and give context to the regiments various deployments. Nevertheless, the experiences of individual men and women of the regiment are not forgotten.