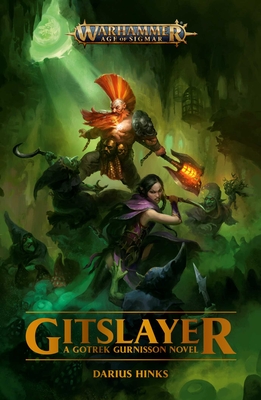 
Not On Our Shelves—Ships in 1-5 Days
Gotrek returns to fight the forces of the Gloomspite Gitz!

Hell-bent on ridding himself of the Fyreslayer rune buried in his chest, Gotrek Gurnisson, the greatest Slayer to ever live, travels deep into the strange, alchemical realm of Chamon. Using their mysterious aether-science, the Kharadron Overlords of Barak-Urbaz offer an end to Gotrek’s quest. But, as the Bad Moon rises and murderous Gloomspite Gitz threaten to destroy the sky-port, Gotrek pits himself against the most ancient enemy of his people – the greenskins. While his aelven travelling companion, Maleneth Witchblade, struggles to keep him alive, Gotrek throws himself headlong into a bloody battle for survival that will take him into the dank, fungal heart of Skragrott’s Asylum.
Darius Hinks is the author of the Warhammer 40,000 novel Blackstone Fortress and three novels in the Mephiston series, Mephiston: Blood of Sanguinius, Mephiston: Revenant Crusade and Mephiston: City of Light. He also wrote the novella Sanctus. For Warhammer, he wrote Warrior Priest, which won the David Gemmell Morningstar Award for best newcomer, as well as the Orion trilogy, Sigvald and several novellas. His work for Age of Sigmar includes Stormcast, Warqueen and the Gotrek Gurnisson novel Ghoulslayer.