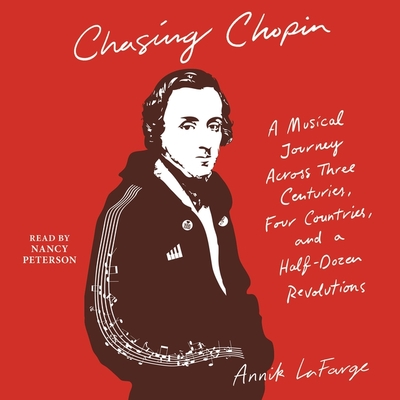 
Special Order—Subject to Availability
A modern take on a classical icon: this original, entertaining, well-researched book uses the story of when, where, and how Chopin composed his most famous work, uncovering many surprises along the way and showing how his innovative music still animates popular culture centuries later.The Fr d ric Chopin Annik LaFarge presents here is not the melancholy, sickly, romantic figure so often portrayed. The artist she discovered is, instead, a purely independent spirit: an innovator who created a new musical language, an autodidact who became a spiritually generous, trailblazing teacher, a stalwart patriot during a time of revolution and exile. In Chasing Chopin she follows in his footsteps during the three years, 1837-1840, when he composed his iconic "Funeral March"--dum dum da dum--using its composition story to illuminate the key themes of his life: a deep attachment to his Polish homeland; his complex relationship with writer George Sand; their harrowing but consequential sojourn on Majorca; the rapidly developing technology of the piano, which enabled his unique tone and voice; social and political revolution in 1830s Paris; friendship with other artists, from the famous Eug ne Delacroix to the lesser known, yet notorious in his time, Marquis de Custine. Each of these threads--musical, political, social, personal--is woven through the "Funeral March" in Chopin's Opus 35 sonata, a melody so famous it's known around the world even to people who know nothing about classical music. But it is not, as LaFarge discovered, the piece of music we think we know. As part of her research into Chopin's world, then and now, LaFarge visited piano makers, monuments, churches, and archives; she talked to scholars, jazz musicians, video game makers, software developers, music teachers, theater directors, and of course dozens of pianists. The result is extraordinary: an engrossing, page-turning work of musical discovery and an artful portrayal of a man whose work and life continue to inspire artists and cultural innovators in astonishing ways. A companion website, WhyChopin, presents links to each piece of music mentioned in the book, organized by chapter in the order in which it appears, along with photos, resources, videos, and more.