The Medieval Twelve Days of Christmas: A Musical Pageant of the Feast Days Between December 25 and January 6 as They Were Celebrated in England in the (Paperback) 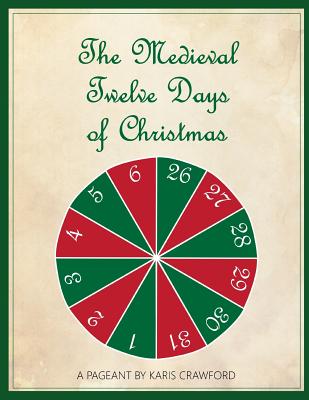 The Medieval Twelve Days of Christmas: A Musical Pageant of the Feast Days Between December 25 and January 6 as They Were Celebrated in England in the (Paperback)


Not On Our Shelves—Ships in 1-5 Days
(This book cannot be returned.)
In the Middle Ages, the Christmas season didn't end on December 25. Instead, the festivities were just beginning This pageant vividly re-creates Christmas celebrations in medieval England with brief excerpts from plays, legends, sermons, poems, and liturgies. As the days of Christmas unfold, saints and sinners, wassailers and kings, noblewomen and soldiers make appearances, and a narrator provides a unifying voice. Linking the segments are merry carols and haunting chants, offered by instrumentalists and singers. On the stage, a unique Wheel of Christmastide (depicted on the cover of the book) is rotated to mark the progression of the Christmas season. The Medieval Twelve Days of Christmas pageant will be a popular addition to the performance lineups of living history groups, churches, church-affiliated high schools and colleges, early music ensembles, and local theater companies. Complete production instructions are included, covering casting, costumes, props, venue, printed programs, scholarly background, and more. Adults and older children perform and are also the targeted audience for the pageant, which runs about 60 to 80 minutes. Although the narratives and songs in this pageant are authentically medieval, the materials have been crafted in Modern English to be easily understood. The script coordinates with music and lyrics in The New Oxford Book of Carols, edited by Keyte and Parrott (1992), which should be purchased separately. Please note that this pageant is based on Christian observances in England in the Middle Ages, not on the later song about a partridge in a pear tree The author of The Medieval Twelve Days of Christmas holds a PhD in medieval literature from the University of Toronto, as well as a License in Medieval Studies from the Pontifical Institute of Medieval Studies. She served as an associate editor for the Middle English Dictionary, taught medieval and Renaissance literature at the University of Michigan, and led a graduate writing program at Hamline University. In 2002, she produced and directed a successful staging of the pageant in Ann Arbor, Michigan, for an audience of about 500.