A Band with Built-In Hate: The Who from Pop Art to Punk (Paperback) 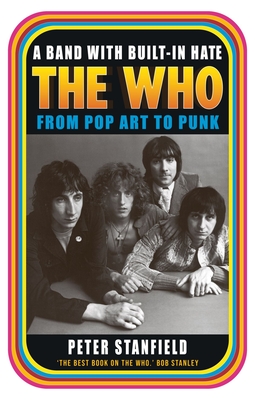 A Band with Built-In Hate: The Who from Pop Art to Punk (Paperback)


On Our Shelves Now at:
Exploring the explosion of the Who onto the international music scene, this heavily illustrated book looks at this furious band as an embodiment of pop art.

“Ours is music with built-in hatred,” said Pete Townshend. A Band with Built-In Hate pictures the Who from their inception as the Detours in the mid-sixties to the late-seventies, post-Quadrophenia. It is a story of ambition and anger, glamor and grime, viewed through the prism of pop art and the radical leveling of high and low culture that it brought about—a drama that was aggressively performed by the band. Peter Stanfield lays down a path through the British pop revolution, its attitude, and style, as it was uniquely embodied by the Who: first, under the mentorship of arch-mod Peter Meaden, as they learned their trade in the pubs and halls of suburban London; and then with Kit Lambert and Chris Stamp, two aspiring filmmakers, at the very center of things in Soho. Guided by contemporary commentators—among them, George Melly, Lawrence Alloway, and most conspicuously Nik Cohn—Stanfield describes a band driven by belligerence and delves into what happened when Townshend, Daltrey, Moon, and Entwistle moved from back-room stages to international arenas, from explosive 45s to expansive concept albums. Above all, he tells of how the Who confronted their lost youth as it was echoed in punk.
Peter Stanfield’s books include Maximum Movies: Pulp Fictions and Hoodlum Movies. Music is integral to his work, be it the blue yodel of a singing cowboy or the chug ’n’ churn of a biker soundtrack.
"Eloquently framing their success as the only successful 1960s UK pop/rock group that didn't want to be either the Beatles or the Rolling Stones, Stanfield locates the Who (and crucially their peak years, during which they were, he writes 'not copyists but innovators') at a boundary-breaking intersection of pop and art-rock."
— Tony Clayton-Lea

“There’s some very perceptive writing on the influence the Who had on the wider scene. . . . Essential reading for anyone who’s ever loved the Who, or wants an insight into the Sixties’ music scene that goes beyond greatest hits compilations and easy generalizations.”
— Louder Than War

"If Roger Daltry's 2018 autobiography was a prosaic foot soldier's telling of the Who story, here is a view from the high plains. . . . The best parts of the book mirror the best of the Who, fizzing with ideas and connections. . . . This book vividly reanimates the nasty, transgressive, scene-shaping thrill of their beginnings."
— Daily Mail

"[An] ear for apt detail enriches Stanfield's stolid account. He plumbs archives for ephemeral magazines and forgotten interviews to reveal more than the standard recitals of the works."
— PopMatters

“Stanfield uncovers the underpinnings of the Who. . . . He has masterfully identified the mod, pop art, and art rock stages of the Who’s career for rock fans and general readers alike.”
— Library Journal

"[The book] brings together some significant criticism of the Who, connecting them with all manner of cultural references, and is a valuable addition to my ever-expanding Who library. That the Who continue to be so well-served by knowledgeable authors is a tribute to their importance."
— Chris Charlesworth

"A Band With Built-in Hate reaffirms the Who's importance to the rock and pop revolutions of the sixties and seventies."
— Choice Magazine (UK)

"Stanfield examines how the Who took in disparate influences from outside the rock world—influences flying in from the fine and pop arts, youth culture, and so-on—and shipped them back out to be co-opted by everyone from the Creation to the Sex Pistols. It is the first deep, book-length look at an important aspect of the Who’s persona and art that is an integral portion of every book on the band."
— Psychobabble

"The best book on the Who. Stanfield understands that they were built entirely around opposition—they didn’t want to be the Beatles or the Stones; they didn’t even want to be the Who most of the time. He smartly states the case for peak Who as transgressive, how their clashing obsessions with primitive rock’n’roll and sociological statements made them so exciting. He also wisely concentrates on their peak years, before pop solidified as rock, when the Who were the closest thing to pop art British music has ever produced."
— Bob Stanley, founding member of St Etienne and author of "Yeah Yeah Yeah: The Story of Modern Pop"

"With impressive eloquence, A Band with Built-in Hate situates '60s Britain's most volatile and incendiary group at the heart of pop's wild vortex, its sonic assaults on the class system and the cultural status quo. Stanfield digs brilliantly into the Who's transgressions, their upending of entertainment, their transmuting of pop music into art-rock and proto-punk. He can see for miles."
— Barney Hoskyns, author of "Lowside of the Road: A Life of Tom Waits" and "Major Dudes: A Steely Dan Companion"

"That the Who’s image was constantly shifting according to whatever they thought would best promote their music in the moment is the focus of Stanfield’s new book A Band with Built-In Hate. Stanfield examines how the Who took in disparate influences from outside the rock world—influences flying in from the fine and pop arts, youth culture, and so-on—and shipped them back out to be co-opted by everyone from the Creation to the Sex Pistols. It is the first deep, book-length look at an important aspect of the Who’s persona and art that is an integral portion of every book on the band. . . . Fills in the gaps of an important area of Who history."
— Mike Segretto, author of "The Who FAQ: All That's Left to Know About Fifty Years of Maximum R&B"