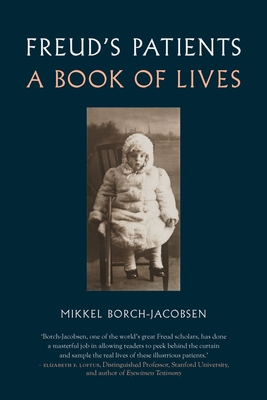 
In Stock—Click for Locations
Portraits of the thirty-eight known patients Sigmund Freud treated clinically—some well-known, many obscure—reveal a darker, more complex picture of the famed psychoanalyst.

Everyone knows the characters described by Freud in his case histories: “Dora,” the “Rat Man,” the “Wolf Man.” But what do we know of the people, the lives behind these famous pseudonyms: Ida Bauer, Ernst Lanzer, Sergius Pankejeff? Do we know the circumstances that led them to Freud’s consulting room, or how they fared—how they really fared—following their treatments? And what of those patients about whom Freud wrote nothing, or very little: Pauline Silberstein, who threw herself from the fourth floor of her analyst’s building; Elfriede Hirschfeld, Freud’s “grand-patient” and “chief tormentor;” the fashionable architect Karl Mayreder; the psychotic millionaire Carl Liebmann; and so many others? In an absorbing sequence of portraits, Mikkel Borch-Jacobsen offers the stories of these men and women—some comic, many tragic, all of them deeply moving. In total, thirty-eight lives tell us as much about Freud’s clinical practice as his celebrated case studies, revealing a darker and more complex Freud than is usually portrayed: the doctor as his patients, their friends, and their families saw him.
A philosopher by training, Mikkel Borch-Jacobsen is professor of comparative literature at the University of Washington and a leading theorist and historian of psychoanalysis and psychiatry. A regular contributor to the London Review of Books, he is the author of sixteen books.
"I love a book that tells me something I don't know.  Borch-Jacobsen's Freud's Patients: A Book of Lives—which digs up all that can be dug on the people who were personally treated by Freud—did that. I knew Freud's reputation was on the slide, but this pushes it right into the drink. Borch-Jacobsen shows how Freud sometimes outright falsified his results to fit his theories; and kept even hopeless cases on the couch as long as the fees rolled in. Scoundrel!"
— Sam Leith

"Borch-Jacobsen has sifted through the archives to discover the real stories anonymized in the case studies on which Sigmund Freud based his theories, and the lives of the patients who submitted to analysis on the great man's original couch. What he discovered is startling. Borch-Jacobsen tells... how Freud falsified the data to fit his theories, kept incurable cases coming back week after week to keep the fees rolling in—and how the global industry of Freudian analysis resembles a religious cult more than a science."
— Spectator

"Time has not been kind to Freud. The list of writers, books, and articles picking apart his psychoanalytic theories is a long one. Borch-Jacobsen’s Freud’s Patients is part of this critical wave, but Borch-Jacobsen attacks the subject from a unique angle. The book is made up of thirty-eight vignettes recounting the lives and analyses of Freud’s patients, and, where sufficient biographical information exists, the hidden reality behind Freud’s published accounts. As this absolutely thrilling volume makes clear, Freud’s successes were often illusory."
— Jewish Currents

"[A] brilliant investigation of the background of those who stretched out on Freud’s couch."
— Tablet Magazine

“Freud’s Patients brings new scrutiny to the methods used by Freud with the patients he treated, including his own daughter, Anna. Not least, the book illustrates through the fates of those under Freud’s care that his treatments may not only have been ineffective, but at times utterly destructive. Borch-Jacobsen, one of the world’s great Freud scholars, has done a masterful job in allowing readers to peek behind the curtain and sample the real lives of these illustrious patients.”
— Elizabeth F. Loftus, Distinguished Professor, Stanford University, author of “Eyewitness Testimony” coauthor of “The Myth of Repressed Memory”

“Freud’s Patients features thirty-eight historical portraits, but the picture which emerges is a strikingly true-to-life one of Freud himself, drawn by his subjects, their friends and families, and framed in this beautifully presented collection. Freud’s case histories have been compared to fiction from the beginning—not least by their author himself. Freud’s Patients separates the fact from the fiction with stunning and sobering effect and makes this book a must-read for anyone who wants to know the truth about these cases. It is a landmark publication which reveals the truth so often obscured in the case histories. The result is a riveting read which is not just better informed but much more interesting than Freud’s fiction. You couldn’t make it up!”
— Christopher Badcock, author of “The Imprinted Brain”