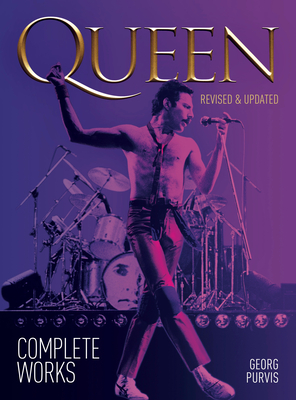 
Not On Our Shelves—Ships in 1-5 Days
Clashing together outrageous musical influences, and extravagant visual imagery, Queen's place in history as the greatest glam band of them all is rock solid.

Their fan base continues to grow, over 25 years on from the death of Freddie Mercury, Queen's flamboyant, unforgettable front man. Georg Purvis's meticulous, session-by-session, song-by-song, album-by-album, tour-by-tour record of the band's progress is the complete reference source that Queen fans have been waiting for. If you love the Champions of Rock, it's all here:

The Band - detailed insights into Freddie Mercury, Brian May, Roger Taylor and John Deacon including bands the members formed outside of Queen and solo endeavours

The Albums - detailed production history and analysis of every album, including solo releases

The Songs - hundreds of individual entries on all the famous recordings, as well as obscure, unreleased rarities

The Videos - a complete guide to Queen's groundbreaking video work

Plus - the reunion shows with Paul Rodgers, Adam Lambert, the radio sessions, the costumes, the parties and much, much more...
Georg Purvis is a writer, amateur photographer, musician, avid music collector, and leading historian of Queen. He lives in Philadelphia.