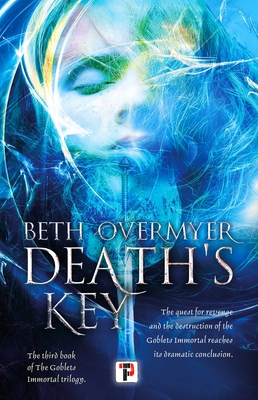 
Not On Our Shelves—Ships in 1-5 Days
"Fans of pseudo-medieval fantasy quest tales and authors like Terry Brooks, Anne McCaffrey, and Brandon Sanderson... will get a kick out of Overmyer's action-packed series." — Booklist. The fantastic conclusion to The Goblets Immortal series.

"Fans of pseudo-medieval fantasy quest tales and authors like Terry Brooks, Anne McCaffrey, and Brandon Sanderson, and those looking for something to read after bingeing the Netflix show Cursed, will get a kick out of Overmyer's action-packed series." — Booklist

Book 3 in the Goblets Immortal series.

﻿Years after the Circle disbanded, Meraude builds an army to rid the land of mortals, wizards, and anyone she cannot control. The Goblets Immortal and the throne of Inohaim Tower soon will be hers! But there is a thorn in her side and a flaw in her plan.

Aidan, a Summoner Meraude had once recruited, has turned against her. He and Slaíne need to ally with Meraude’s twins to stop the so-called mage queen. The Goblets must be brought to Inohaim Tower to be destroyed…if the four Blest can escape the wizard Hex and his House of Curses, that is.

FLAME TREE PRESS is the imprint of long-standing Independent Flame Tree Publishing, dedicated to full-length original fiction in the horror and suspense, science fiction & fantasy, and crime / mystery / thriller categories. The list brings together fantastic new authors and the more established; the award winners, and exciting, original voices. Learn more about Flame Tree Press at www.flametreepress.com and connect on social media @FlameTreePress
Beth Overmyer is the author of several works of genre fiction, the middle grade novella In a Pickle being among them. Fueled by tea, loved by cats everywhere, she balances her home life with writing novels and leading a creative writing group at her local library.
Praise for Books 1 and 2 in The Goblets Immortal series:

“Overmyer has written a promising series opener with a rich supporting cast of characters. Packed full of adventure and ending with a cliffhanger that leaves readers anxiously awaiting a sequel.” — ALA Booklist

“The magic system that Overmyer creates is compelling as well as familiar, so the reader has no issues buying into it the moment it is introduced. This fantasy has a similar flavor to YA, making it a good transition novel for the teen who is ready to begin reading adult fantasy. The book is fast-paced and can be read in a day—perfect for a long airplane ride.” — SciFiMoviePage

“The Goblets Immortal is a very interesting and unique fantasy story. Aiden and Slaine are very characters that are worth following, there is cool magic, an evil Mage, and almost no knows what is going on! It is fun and chaotic, and I really enjoyed the read.” — FanFiAddict

“I had a blast reading this compelling fantasy with a wonderful character driven plot lead by a sympathetic, but kick ass main character! I highly recommend this book!” — The Haunted Fae

“A well-paced, character driven novel that immediately pulled me in and wouldn’t let me put it down.” — Jessica Belmont

"Overmyer ramps up the action in this suspenseful sequel to 'The Goblets Immortal' [...] the magic system is innovative as ever and the dramatic chase scenes drive the plot forward. Series devotees will find plenty to hold their attention." — Publishers Weekly

"Fans of pseudo-medieval fantasy quest tales and authors like Terry Brooks, Anne McCaffrey, and Brandon Sanderson, and those looking for something to read after bingeing the Netflix show Cursed, will get a kick out of Overmyer's action-packed series." — Booklist

?"A riveting good read from cover to cover, "Holes in the Veil" (the sequel to "The Goblets Immortal") is another extraordinary and deftly crafted action/adventure fantasy from the mind and imagination of fantasy author Beth Overmyer." — Midwest Book Review

"It is witty and adventurous, and I loved all the tension-building elements… I recommend this book and series for fans of fantasy, and especially those who like adventure fantasy. I suspect you will not be disappointed." — FanFiAddict

"With its well developed characters, a tension packed plot and fantastic world building this is a marvellous adventure of magic and fantasy." — The Bookwormery