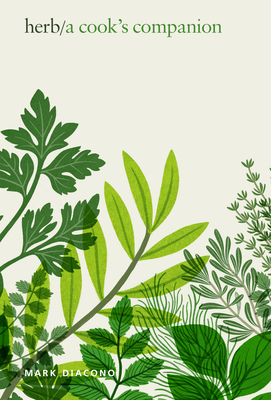 
Not On Our Shelves—Ships in 1-5 Days
"A beautiful book, and one which makes me want to cultivate my garden just as much as scurry to the kitchen." – Nigella Lawson

"At its core this book is about cooking, but it's an essential and valuable resource for folk who love to grow their own herbs and cook. Sorted by individual herbs with detailed notes on how to grow and use them, it's going to be a book I will turn to a lot over the years." – Nik Sharma

Herb is a plot-to-plate exploration of herbs that majors on the kitchen, with just enough of the simple art of growing to allow the reader to welcome a wealth of home-grown flavors into their kitchen. Author Mark Diacono is a gardener as well as a cook. Packed with ideas for enjoying and using herbs, Herb is much more than your average recipe book. Mark shares the techniques at the heart of sourcing, preparing and using herbs well, enabling you to make delicious food that is as rewarding in the process as it is in the end result. The book will explore how to use herbs, when to deploy them, and how to capture those flavors to use when they might not be seasonally available. The reader will become familiar with the differences in flavor intensity, provenance, nutritional benefits and more. Focusing on the familiars including thyme, rosemary, basil, chives and bay, Herb will also open the door to a few lesser-known flavors. The recipes build on bringing your herbs alive – whether that's a quickly swizzed parsley pesto when short of time on a weekday evening, or in wrapping a crumbly Lancashire cheese in lovage for a few weeks to infuse it with bitter earthiness. With a guide to sowing, planting, feeding and propagating herbs, there are also full plant descriptions and their main culinary affinities. Mark then looks at various ways to preserve herbs including making oils, drying, vinegars, syrups and freezing, before offering over 100 innovative recipes that make the most of your new herb knowledge.
Mark is lucky enough to spend most of his time eating, growing, writing and talking about food. His A Year at Otter Farm and A Taste of the Unexpected both won Food Book of the Year, for Andre Simon and the Guild of Food Writers, respectively. His book Sour was Food Book of the Year 2019 in The Sunday Times and Daily Mail. Known for growing everything from Szechuan pepper to pecans to Asian pears, Mark's refreshing approach to growing and eating has done much to inspire a new generation to grow some of what they eat.

He was involved with River Cottage, appearing in the TV series, running courses and events at River Cottage HQ, and he has written four River Cottage books. Mark also writes regularly for a range of publications including The Telegraph and Country Life, and his features have appeared in The Observer, Guardian, National Geographic, and others.