To Calais, in Ordinary Time (Paperback) 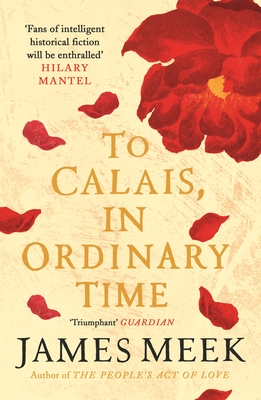 To Calais, in Ordinary Time (Paperback)


In Stock—Click for Locations
Three journeys. One road. England, 1348. A gentlewoman flees an odious arranged marriage, a proctor sets out for a monastery in Avignon, and a young plowman in search of freedom is on his way to volunteer with a company of archers. All come together on the road to Calais. In the other direction comes the Black Death, the plague that will wipe out half of the population of Northern Europe.
To Calais, In Ordinary Time is an exploration of love, death, and power, against the backdrop of catastrophe.
James Meek is the author of six novels, including The People's Act of Love, which was longlisted for the Man Booker Prize and won both the Royal Society of Literature Ondaatje Prize and the Scottish Arts Council Award. It has been published in more than thirty countries. Meek has also written two collections of short stories and two books of non-fiction: Private Island, which won the 2015 Orwell Prize, and Dreams of Leaving and Remaining. He is a Contributing Editor to the London Review of Books and writes regularly for the Guardian and New York Times. He lives in London. In 2020, To Calais, In Ordinary Time was shortlisted for the Walter Scott Prize for Historical Fiction and longlisted for the Orwell Prize for Political Fiction.