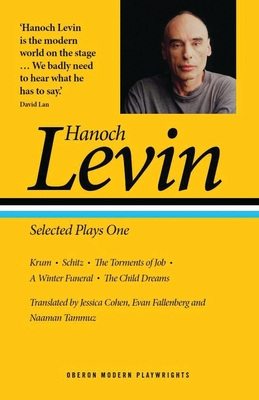 
Not On Our Shelves—Ships in 1-5 Days
'Hanoch Levin is the modern world on the stage... we badly need to hear what he has to say.' David Lan

Hanoch Levin was one of Israel's leading dramatists. Born in Tel Aviv in 1943, his work includes comedies, tragedies, and satirical cabarets, most of which he directed himself. He received numerous theatre awards both in Israel and abroad and his plays have been staged around the world. Levin was awarded the Bialik Prize in 1994.

Published in brand-new English translations, these selected volumes of Hanoch Levin, one of Israel's leading dramatists, aim to bring one of the most important playwrights of the Middle East to English speaking audiences.

Plays One contains the plays Krum (1975), Schitz (1975), The Torments of Job (1981), A Winter Funeral (1978), and The Child Dreams (1993).
Hanoch Levin was born in Tel Aviv on December 18, 1943 and died of cancer on August 18, 1999. He wrote plays, sketches, songs, stories and poetry, and also directed most of his own plays. During his work as a playwright and stage director, he developed a unique dramatic and theatrical language, created by combining poetic written text and images designed with the actors and set designers, costume and lighting, composer and choreographer. His plays are characterized by his ability to combine the work of different artists and have always been a celebration of words and visual images, based on a great love for the theater and all who take part in the performance. Levin left a spiritual - artistic legacy, which includes 56 plays (except for his political satires, only 33 of his plays were performed in his lifetime), two books of prose, two collections of sketches and songs, a book of poems and two books for children. In 1999, the last year of his life, he took care to publish all his works.