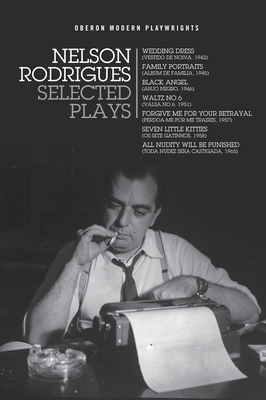 
Not On Our Shelves—Ships in 1-5 Days
Nelson Falc o Rodrigues (August 23, 1912 - December 21, 1980) was a Brazilian playwright, journalist and novelist. In 1943, he helped usher in a new era in Brazilian theater with his play Vestido de Noiva (Wedding Dress), considered revolutionary for the complex exploration of its characters' psychology and its use of colloquial dialogue. He went on to write many other seminal plays and today is widely regarded as Brazil's greatest playwright.

This volume contains brand-new translations of the plays Wedding Dress; Waltz No. 6; All Nudity Will Punished; Forgive Me for Your Betrayal; Family Portraits; Black Angel and Seven Little Kitties.
Nelson Falcao Rodrigues (August 23, 1912 - December 21, 1980) was a Brazilian playwright, journalist and novelist who became the progenitor of the modern Brazilian theatre A deeply controversial writer, today he is widely regarded as Brazil's greatest playwright. His astonishing career over four decades addressed burning taboo issues in Brazilian society - race, sexual repression, incest, crime and murder, causing Rodrigues to refer to his work as 'theatre of the unpleasant'. Censored for their shocking material, many of his plays remained unperformed for decades. Restlessly inventive, he was the voice of Rio's poor, its lower-middle class, its ignored, before turning his attention to mythical themes.