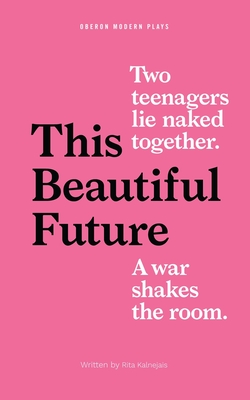 
Not On Our Shelves—Ships in 1-5 Days
(This book cannot be returned.)
Elodie is 17. She's French. She washes her legs before going to church. She believes in God. Otto is 15. He's a German soldier. Bulletproof skin. Eyes that could pierce tanks. He was part of a firing squad today. It's 1944. Outside, the world around them is exploding. Inside, the room shakes. Elodie and Otto's naked bodies touch.
Rita Kalnejais has worked extensively as an actor at Belvoir, Griffin, Malthouse and Sydney Theatre Companies. Rita's first play, BC, was nominated for three Greenroom Awards including Best New Australian Play. Rita was a resident playwright at Sydney Theatre Company in 2011/12 and her screenplay Cottontop won her a scholarship at Sydney Film School in 2008. Rita's Soho Six commission First Love Is The Revolution premiered at Soho Theatre in 2015.
'There’s a thing that happens right at the end of Jay Miller’s already-extraordinary production of Rita Kalnejais’s astonishing new play that moves it from “one of the best things I’ve seen this year” to “one of the best things, full stop.”... if I did stars it would get at least five.' Andrew Haydon

'A teenage Nazi soldier and a French girl secretly meet on the eve of the American army's triumphant arrival, spending one last night together before their worlds are turned upside down... Rita Kalnejais' kaleidoscopic new play This Beautiful Future mines this compellingly weighted scenario for all it's worth... One of Kalnejais' play's most powerful tools is its refusal to be pinned down, its insistence that nothing is straightforward... An extraordinary work.' The Stage ★★★★★

'Rita Kalnejais’s foxy First Love Is the Revolution at Soho theatre in London was one of 2015’s most distinctive plays, and this uncommon 70-minute show is similarly idiosyncratic, yet direct and truthful... Moments that might come across as sentimental are stupidly beautiful and teary... Combined with our knowledge of how the war ended, it creates a growing sense of loss in an evening that is as tender as a burn... It reminds us that we all become ghosts of our younger selves who once fizzed with the excitement of being alive and in love. We need to hang on to that feeling: the future may depend on it.' Lyn Gardner, Guardian ★★★★

'The young couple are superbly drawn by playwright’s Rita Kalnejais. Charmingly believable as they fumbling over their half-formed, often silly, thoughts, they radiate the warmth of uncomplicated first love... That This Beautiful Future wears this complexity so lightly is a testament to its brilliance... Its plea for more alertness and less judgement is enveloped in a hug rather than a hammer over the head. Let’s hope we haven’t see the last of this play'. Exeunt