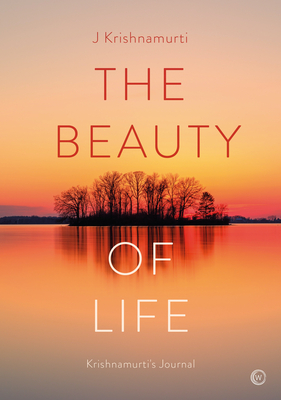 
Coming Soon—Pre-Order Now
The final writings by the world-famous spiritual teacher J Krishnamurti, in which he reflects to himself on the natural world around him and what this might tell us about human consciousness. Includes previously unpublished material.

Most of Krishnamurti's books are transcriptions from the many talks he gave. This book however contains short pieces from his notebooks, which are heartfelt and intimate. More than 55 short entries, between one and six pages long, start with descriptions unfolding amidst mountains, jungles and rolling meadows and then end with his own spontaneous musings. The writing feels totally spontaneous and in-the-moment, and is never clichéd or too smooth. You are drawn to consider his words carefully, because your mind is quiet.

For Krishnamurti, the challenge is to keep our minds free from preconceptions and ultimately free from any concepts at all. So, you don't "decide" to meditate and you never consciously meditate at all as a distinct action. You actively meditate from one second to the next but without effort. It's just how you are. Our minds can bring us down and seemingly conspire against us, but a quieter contemplation of how things truly are can also bring breakthroughs and peace. This is exactly what this book is for, through its vivid scenes and helpful contemplations.

Krishnamurti is perfect for seekers who have exhausted all the "how tos" and are disillusioned by teachers who are coasting or who are writing books to generate an income when they have nothing to say. The spiritual market is maturing and there are many people who want more. This is for them.
Jiddu Krishnamurti lived from 1895 to 1986, and is regarded as one of the greatest philosophical and spiritual figures of the twentieth century. He claimed no allegiance to any caste, nationality or religion and was bound by no tradition. For nearly sixty years he traveled the world and spoke spontaneously to large audiences until the end of his life in 1986 at the age of ninety.