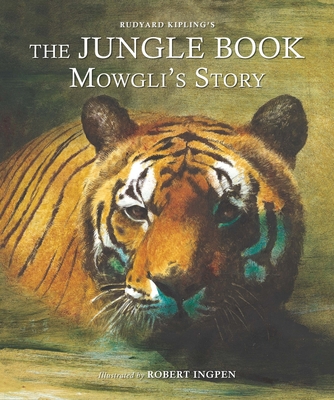 
Not On Our Shelves—Ships in 1-5 Days
From the moment a little naked cub wanders into the lair of Father Wolf and Mother Wolf to the moment when the master of the jungle returns to his own people, Mowgli's adventures comprise a fable of human life. Along with these stories are other animal tales. This is a magnificent new edition of the best-loved story, featuring beautiful illustrations by award-winning Australian illustrator Robert Ingpen and retold for a younger audience. A rich and complex fable of animal and human life, Kipling’s enduring classic dazzles the imagination with its astonishing descriptive powers and lively sense of adventure.
Rudyard Kipling (1865-1936) was one of the most popular writers in English of the late 19th and early 20th centuries. He was the youngest and the first English-speaking Nobel laureate. Robert Ingpen was awarded the Hans Christian Andersen Medal in 1986 for his contribution to children’s literature and he has been honored with Membership of the Order of Australia.
"I still marvel at the inventiveness of Rudyard Kipling . . . the characters come to life at the hand of Ingpen—just as my mother’s voice brought them to life when she read them to me." —Michael Morpurgo