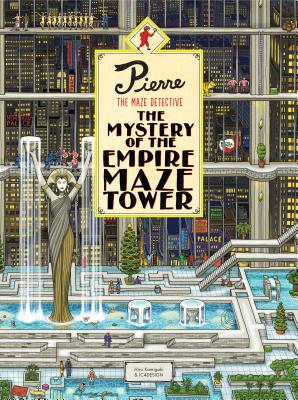 
Not On Our Shelves—Ships in 1-5 Days
Pierre and Carmen are called to New Maze City, along with others of the world's best Maze Detectives, to help solve the puzzles, protect the treasure and stop Mr. X. But can you help them make it in time?

Mr. X the Phantom Thief is back, with a new evil plan! He wants to steal the shining light from the top of the Empire Maze Tower, New Maze City's greatest treasure.

A thrilling new maze challenge adventure for Pierre the Maze Detective and all detectives aged 8+ is hours of puzzle fun. Take a trip through a fantastic world of underground cities, hot–air balloons, tree–top towns and haunted houses. Trace your way through each maze, spot the clues and solve the extra mystery challenges along the way. Featuring new mazes and seek–and–find challenges in a series of IC4DESIGN's trademark and popular detailed cityscapes.

A page of answers with the routes through the mazes and other solutions is included at the end of the book.

Other Pierre The Maze Detective titles: