The Best of Cat Girl (Paperback) 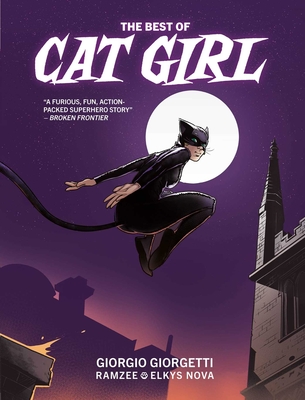 The Best of Cat Girl (Paperback)


Not On Our Shelves—Ships in 1-5 Days
"Wildly entertaining" - Comicbooknews.co.uk

The first ever collection of the UK's premier superheroine, this action packed comic is perfect for readers new to the meow-gnificent world of Cat Girl!

The beloved UK superheroine finally pounces into her own collection!

From the pages of classic 1960s girls' comic Sally comes the first ever collection of beloved British superheroine The Cat Girl! Cathy Carter is not your average teen. She can jump further, fight longer and climb higher than anyone she knows – with the aid of a magic suit, she is Cat Girl! Facing off in glamorous, globetrotting adventures against supervillains and master criminals, Cathy often finds the hardest fight comes from her bumbling detective father, who doesn’t believe Cathy can fend for herself. Can Cathy save the world when the person trying to hold her back – is her dad?

This collection contains Cat Girl's latest adventure, Cat Girl Returns from the Tammy & Jinty special, as well as a purrfect selection of the best classic Cat Girl stories from Sally, and a brand new cover from Elkys Nova.

Born in 1921 in Italy, Giorgio Giorgetti emigrated to the UK in 1951. He had three decade long career in comics, working across the boys and girls’ titles. For the boys’ market, he drew Rat-Trap for Corr!!, The House of Dolmann for Valiant as well as contributing to Shiver & Shake, Eagle and Look & Learn. For the girls’ market, he drew Mam’selle X for Girls’ Crystal in addition to his work on Tammy, Jinty, Mirabelle, Katy, June & School Friend and of course Sally, the short-lived girls’ adventure comic, for which he co-created iconic UK heroine the Cat Girl. His final strip was Jump, Jump Julia for Tammy. He died in 1982.

RAMZEE is what happens to a kid who grows up on a diet of 90’s Image and 2000’s Toonami. Since being nominated for a British Comic Award for his debut indie comic in 2016, he’s gone on to draw illustrations for the BBC & MerkyBooks and write Cat Girl for Rebellion’s 'Tammy & Jinty', ‘FAB’ for StoryWorlds and write & draw his first graphic novel ‘LDN’ for Good Comics.
"A furious, fun, action-packed superhero story" - Broken Frontier