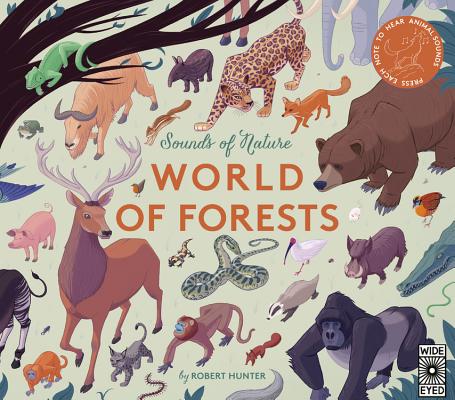 
Not On Our Shelves—Ships in 1-5 Days
Travel the world with the Sounds of Nature series – press the note in each of the 10 forest habitats to hear vivid recordings of over 60 different animal sounds.

The Sounds of Nature series brings the natural world to life with the sounds of real animals recorded in the wild. Captivating edge-to-edge illustrations show animals in action in their habitats around the globe. The animals are numbered in the order they can be heard, with fascinating facts and descriptions of the sounds they make, so you can listen out for each one. A speaker set into the back cover plays a sound clip when you press firmly on the note in each illustration. The battery is already installed, so simply open and explore.

Listen to these wooded places come to life as you hear the:Step under the trees, where 80 percent of the world's land species make their home, to take in the glorious sights and sounds!

Robert Frank Hunter is a London based illustrator. Working on range of projects in both print and moving image, he is keen to keep applying his work to new disciplines. Robert currently works from Lighthouse Studios in east London and is signed to Blink art.

'Informative with well-judged text and richly?coloured?illustrations.'—Metro