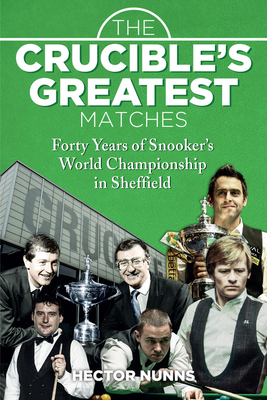 
Special Order—Subject to Availability
Since 1977, Sheffield's Crucible Theatre has staged the snooker World Championship and is one of sport's most iconic venues. The Crucible's Greatest Matches features the greatest matches played there, including classic encounters involving Ronnie O'Sullivan, Stephen Hendry, Jimmy White, Alex Higgins, and the 1985 final between Dennis Taylor and Steve Davis.
Hector Nunns is a journalist who has covered snooker for 15 years for British daily and Sunday newspapers (including the Times, Daily Mirror, Sun, Daily Express, Daily Star, People, and Sunday Mirror), as well as magazines and overseas publications such as China Daily. He often appears as an analyst on BBC coverage from the Crucible, and also covers British and international football.