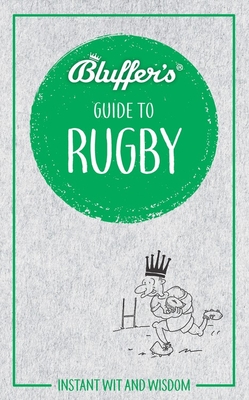 
Special Order—Subject to Availability
Instantly acquire all the knowledge you need to pass as an expert in the world of rugby with Bluffer's Guide to Rugby. Know what to say and what to do in the company of rugby fans, and what excuses to make when the drinking games start. On the field of play, never again confuse a Garryowen with a grubber, a blindside with an eye gouge, or a spear tackle with a turnover. Bask in the admiration of your fellow rugby lovers as you pronounce confidently on the chances of your team trouncing the opposition, impress them with your seemingly extensive knowledge of the game’s labyrinthine rules and tactics, and make sure that you’re well versed in the difference between the two ‘codes’ of rugby league and rugby union. Above all, know that the game originated thanks in part to a blatant display of cheating.

Steven Gauge played the least amount of rugby he could get away with at school before perfecting the art of avoiding games masters and any sporting activity whatsoever. A few decades later, as part of a comprehensive midlife crisis, he found himself as captain of the third-worst rugby side in Surrey, Warlingham fourth XV where he unhelpfully extended the careers of several other players who really should have retired sooner. Unable to survive on the meager earnings from the sales of his first rugby book, My Life as a Hooker, Steven is hard at work in the rough and tumble world of political consultancy. He feels a lot safer there than at the bottom of a heaving pile of 15 malodorous and overweight men.