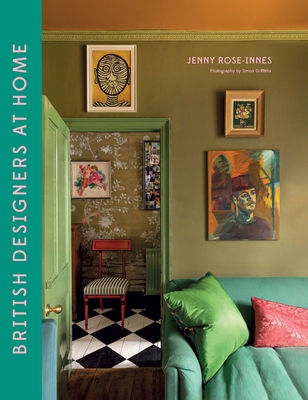 
Not On Our Shelves—Ships in 1-5 Days
For anyone interested in interiors, there is so much inspiration available online and in magazines these days of carefully curated spaces and contemporary homes. But what sort of spaces do interior designers themselves live in?

British Designers at Home is for anyone curious to find out more about designers, and glean ideas and practical information for their own homes. This engaging and visually enticing book profiles over 20 of the most important names in British design and decoration in their own personal spaces.

Each designer has been profiled and photographed at home – alongside details of their working life and the story of how they became interested in design, they talk at length about the house itself and the thinking behind its design and decoration. From the unexpected to that classic British look, this is an exciting look at modern British interiors.
Jenny Rose-Innes is the author of Australian Designers at Home, released by Thames & Hudson in November 2019. She was born in South Africa and has lived in Australia since 2005. Her love of houses, interiors and gardens began at a very young age and, over the past 40 years, Jenny has built or renovated many houses in South Africa, Australia and France. She has also developed gardens – often from scratch – around these houses. Jenny has a strong presence on Instagram, with 90,000 followers who, like her, are passionate about interior design and gardens. @jennyroseinnes