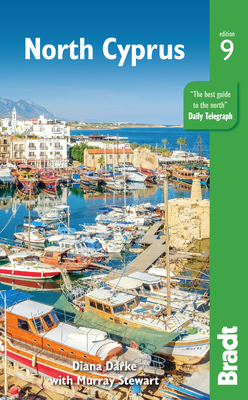 
Special Order—Subject to Availability
Bradt's North Cyprus remains the most authoritative guide available to the fascinating and beautiful northern region of the eastern Mediterranean island of Cyprus. Thoroughly updated by expert authors and now into its ninth edition, it offers everything you need for a successful trip, from pre-departure and background information including when to visit, red tape, safety, history, culture and natural history, to accommodation, restaurants, shopping, festivals, transport and money. The region is broken down into four areas, each of which is covered in detail, including Girne (Kyrenia), Lefkoşa (Nicosia), Gazimağusa (Famagusta) and the Karpas Peninsula, with its population of wild donkeys. Where to go and what to see are detailed for each area and attractions such as Crusader castles, Buyykonuk's markets and eco-festivals, beaches and turtle watching are all covered. There are also contributions from local specialists on flora and fauna.Steeped in history, soaked in sunshine, North Cyprus offers a great deal both to those who want to delve deep into the past or to those keen to pull up a sunbed and simply relax. Girne is still the most attractive harbour on the whole island, while Lefkoşa's old quarter exudes the ambience of an old Middle Eastern trading town. Gazimağusa is fringed with some excellent beaches, while also being close to North Cyprus's most revered historic site, Salamis. With Bradt's North Cyprus, hike up to Buffavento, stroll through the cloisters of Bellapais Abbey or go barefoot on the golden sands of the Karpas Peninsula.
Diana Darke first became interested in the Near East when she read Arabic at Oxford. For the last 26 years she has lived, worked and travelled extensively in Turkey and the Arab world, initially with the Foreign Office, then as an Arabic consultant. Work and pleasure have taken her to both sides of Cyprus on many occasions.Murray Stewart has now worked on three successive editions of this guide and has spent considerable time in the region over a period of a decade. In the course of covering every corner of North Cyprus he has built up a network of local contacts specialising in history, nature and eco-tourism in particular.