Farrow & Ball - How to Decorate: Transform your home with paint & paper (Hardcover) 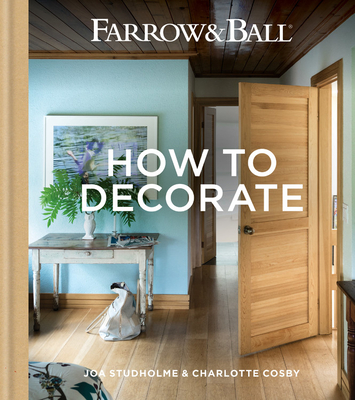 Farrow & Ball - How to Decorate: Transform your home with paint & paper (Hardcover)


Not On Our Shelves—Ships in 1-5 Days
Transform your home with inspiration and advice from one of the world's leading home decorating brands, Farrow & Ball

Set to become the bible of home decoration, Farrow & Ball How to Decorate provides a highly practical and inspirational guide to the successful use of paint and paper in any home, large or small, urban or country.

Published on the 70th anniversary of the founding of the iconic brand, the book brings together the expertise of Joa Studholme and the Farrow & Ball creative team to demystify the nitty-gritty of transforming a home - from deciding which colors work best in a north-facing room to creating accents with paint and making the most of a feature wall.

"Farrow & Ball How to Decorate aims to demystify home decoration. Featuring a host of beautiful homes, with advice on everything from which shades to use in north-facing rooms to the creative potential of floor paint, it's a practical, inspirational guide." - The Times Magazine UK
Joa Studholme
Having joined Farrow & Ball over 19 years ago, Joa Studholme has amassed a vast wealth of experience. From developing the new colours to consulting on design projects, Joa has worked with the paints and papers every day on both residential and commercial projects. A self-confessed 'color-geek', Joa's passion for interior design and color means her own home is under constant renovation and she claims to redecorate it at least once a month.

Charlotte Cosby
Head of creative, Charlotte Cosby, has been working with Farrow & Ball for the past eight years. Charlotte began her career in finance, but she soon realized that her heart was in the creative world and she moved to Farrow & Ball in 2006. She has full responsibility for creative direction, including product development, brand identity, photography, showroom design and much more. Charlotte is passionate about pattern, color and design and spends much of her free time redecorating her beautiful Victorian apartment by the sea.

Farrow & Ball
Paint pioneers John Farrow and Richard Ball founded their company in 1946. They met while working at a local clay pit and later went on to build their first factory in Dorset, southern England, where the company is still based. Farrow & Ball is now one of the world's leading home decorating brands, manufacturing decorative paint and wallpaper that transform homes around the globe.

Farrow & Ball paint is distinguished for its depth of color and unique finish developed through the use of high levels of pigment, rich resin binders, and ingredients with a high refractory nature. In addition, its complementary wallpaper products are handcrafted using Farrow & Ball paint with traditional block and trough printing methods, creating a distinctive tactile texture.