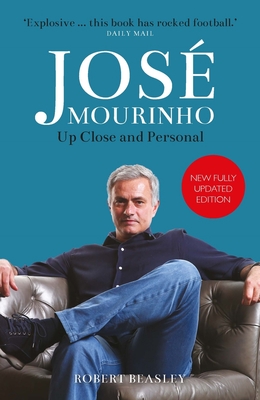 
Special Order—Subject to Availability
<p><b>The gripping biography of one of the most successful managers in the game, José Mourinho, giving rare insight into the man and the manager – now completely revised and updated to include the tumultuous 2020-21 season.</b><br><br>José Mourinho is undoubtedly one of football’s most charismatic and controversial characters. His name is never far from the headlines and having worked at some of the biggest clubs in the world – Porto, Chelsea, Inter Milan, Real Madrid, Manchester United and Tottenham Hotspur – despite the challenges he has faced, he knows how to deliver when it matters. But is the way he conducts himself on the touchline and in front of the cameras the real Mourinho, or an act he puts on for the watching world?<br><br>In this highly acclaimed biography, author and award-winning sports correspondent Robert Beasley reveals the man behind the scenes. Granted privileged access into the Special One’s inner sanctum, Beasley delves into the workings of the famed manager’s mind, as well as backroom antics and transfer sagas at some of the game’s greatest clubs. Revealing the untold stories behind how close Mourinho came to getting the England job, his at times tumultuous relationships with the football establishment, his trials and tribulations at Tottenham and why he will always put family and friends before football, this is a side to José Mourinho you never thought you’d see.</p>
Robert Beasley is one of the nation’s best-known sports writers, and has been a Chelsea supporter since 1967. He’s enjoyed 30 years on Fleet Street and spent the last 22 years on the country’s two biggest-selling newspapers, he has just retired as Chief Sports Correspondent of <i>The Sun</i> and before that was Chief Football Writer and Chief Sports Reporter on the <i>News of the World</i>. He is known for breaking big, exclusive stories and delivering dynamic interviews with some of sport’s biggest names.
Explosive ... this book has rocked football with its fascinating insight in to what makes the game's most controversial manager tick - - Daily Mail

Beasley's book is a valuable, balanced insight into a man who seems intent on splitting people into "haters" or believers - - Newsweek