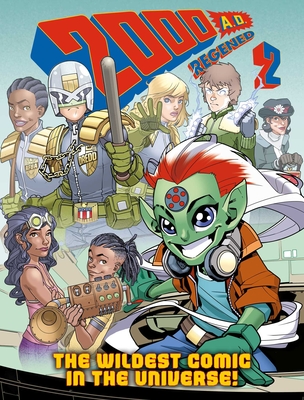 
Backordered
2000 AD Regened is a thrill-powered collection for earthlets of all ages, featuring your favourite 2000 AD characters! Reimagined versions of classic characters like Dredd, Judge Anderson and Johnny Alpha star in action packed adventures alongside brand new characters, specially created for a younger audience. It's a race against time as Cadet Dredd and his clone brother Rico have to defuse a hostage situation in 'Bad Seeds'. When Judge Anderson encounters a malevolent force trying to turn the kids of Mega-City One into swots she has to RESTORE mayhem to the streets. Other characters include Pandora Perfect: futuristic criminal, terrible babysitter and all round bad 'un, teenage mutant bounty hunter Johnny Alpha and the return of ghostbusting duo Finder and Keeper. All this and more in the second volume of 2000 AD’s celebrated series of all-ages science fiction stories!
Matthew Smith was employed as a desk editor for Pan Macmillan book publishers for three years before joining 2000 AD as assistant editor in July 2000 to work on a comic he had read religiously since 1985. He became editor of the Galaxy’s Greatest in December 2001, and then editor-in-chief of the 2000 AD titles in January 2006. He lives in Oxford.

John Reppion has been writing for thirteen years. He has written comics with wife Leah Moore, including The trial of Sherlock Holmes, The Complete Dracula, Shadow over Innsmouth, Raise The Dead, and Damsels, he is a regular columnist for TheDailyGrail.com and writes articles for Fortean Times magazine. He is tired. So tired. Will work for beer. @johnreppion www.moorereppion.com

Born in Naples, Italy on the 23rd of August 1983, Davide Tinto is a great fan of comics. After completing his art studies, he started working for Independent Publishers. Thus began his collaborations with Octane Comics, Inteweb Comics, Big Punch Studio, Evil Kat Studio, Cards & Co., Giochi Uniti, Evoluzione Publishing, Reckless Hero, and many others. In 2018 he embarked on his first trip to America and at the New York Comic Con he has the opportunity to meet the editors of the biggest Majors on the market. Thus he began to work first for Rebellion publishing on the 2000 AD magazine (collaboration still active today); then he began his partnership with IDW for which he drew a run on Marvel Action Spiderman (from issue 10 to 12). Also for IDW he drew the Cover of Issue 1 of the new edition of GI Joe and worked on Clone Wars - Battle Tales 4 and on Star Wars Adventures 3 - Kylo Mini Maggs - Fallow and Lead (Issue forthcoming). At the same time he also began working for Valiant Comics on the comic The Visitor. Between the end of 2019 and the beginning of 2020, through Arancia Studio, he is noticed and chosen by Steve Orlando to undertake a collaboration. The project becomes part of the upcoming releases for Image Comics on which the artist is still working.

Author and comic book writer Cavan Scott is a UK number one bestseller who has written for such popular worlds as Star Wars, Doctor Who, Star Trek, Vikings, Warhammer 40,000 and Sherlock Holmes. He is the author of Star Wars Dooku: Jedi Lost, Judge Dredd: Alternative Facts, The Patchwork Devil, and Cry of the Innocents, and is part of Lucasfilm’s Project Luminous publishing initiative. He has written comics for IDW, Dark Horse, Vertigo, Titan, Legendary, 2000AD, and the Beano.

Paul Davidson is an illustrator and comic book artist from the north east of England. A professional artist for over 25 years working with publishers from around the world. After a brief stint drawing comics in the 90’s Paul spent 9 years as a storyboard/concept artist in the video games industry. In 2008 Marvel lured him back into sequential art, drawing books like The New Mutants and X-Men: Legacy. He’s currently fulfilling a childhood dream of working for the Galaxy’s greatest comic, drawing Judge Dredd.

Since winning 2000 AD's writing competition in 2017, Laura Bailey has written numerous stories for the Prog and Megazine such as DeMarco P.I, Tales of the Black Museum, Future Shocks and Quilli. She also works as a Private Investigator around Devon and Cornwall.

Andrea Mutti was born in Brescia on the 5th of March 1975. He attended the Visual Arts school in Brescia, directed by the Argentine master Ruben Hector Sosa. He started publishing at the beginning of the 1990s collaborating with various publishers such as Fumettando and Fenix. He became part of the group of the HAMMER project and spent about 9 years in Sergio Bonelli Editore on the Nathan Never series. A profitable and continuous collaboration with the French market began where he made numerous volumes with Glenat, Dargaud, Soleil, Lombard, Ankama, Casterman, Dupuis and many others. In 2001 he also landed in the US market working for the prestigious Marvel, DC, Dark Horse, IDW, Image, Top Cow, Vault, Dynamite and BOOM! Studios. He lives between USA and Italy with his wife and 2 children.

Michael Carroll is the author of over forty books, including the award-winning New Heroes series of Young Adult superhero novels and the #1 Amazon best-selling cult graphic novel Judge Dredd: Every Empire Falls. He currently writes Proteus Vex and Judge Dredd for 2000 AD and Judge Dredd Megazine. Other works include Jennifer Blood for Dynamite Entertainment, Razorjack for Titan Books (co-written with artist John Higgins), and the Rico Dredd trilogy for Abaddon Books, for whom he has also created the acclaimed JUDGES series which explores the genesis of the world of Judge Dredd. He can be found on www.michaelowencarroll.com

Nick Brokenshire is a comic book creator from Aberdeen, Scotland who now lives in the North of England. He is a writer/artist for IDW’s STAR WARS ADVENTURES, including stories that feature IG-88, MAX REBO, ASAJJ VENTRESS and DARTH VADER. Nick is also co-creator/artist/colourist of THE ONCE AND FUTURE QUEEN (Dark Horse) and contributes stories and covers for 2000AD, JUDGE DREDD (IDW), ROBOTECH (Titan) and HEAVY METAL MAGAZINE.

Luke Horsman is an illustrator and comic book artist and has been working in the design and illustration industry for nearly 20 years across a variety of media platforms for 100s of clients, including printed publications, websites and games. Now solely a comic book artist he has done scores of work for multiple clients, independent publishers and authors. He’s also currently working on a creator owned project “Oathbound”, an illustrated saga of Norse tales.

Roger Langridge is a comic book writer and cartoonist probably best known for his work on Marvel's Thor: The Mighty Avenger (with Chris Samnee); his web strip and self-published series Fred the Clown; Boom! Studios' The Muppet Show Comic Book; Jim Henson's Musical Monsters of Turkey Hollow; and his Eisner-winning series, Snarked!, an original adventure inspired by the works of Lewis Carroll. He has also worked on Doctor Who, Popeye, Mandrake the Magician, John Carter of Mars and Rocky and Bullwinkle. Most recently, he has written a short run of Eric Powell’s The Goon and drawn Bill and Ted Are Doomed for Dark Horse. He continues to self-publish his own once-yearly comic book, Zoot!, and produce autobiographical strips for the web.

Brett “BlitzCadet” Parson is a Massachusetts based cartoonist. He is best known for his work on multiple Tank Girl titles with original writer and co-creator Alan Martin. He has also worked with DC/Vertigo, Boom!, 2000 AD, Albatross Funny Books, Warner Bros. Animation, Dream Works TV, Sony Music and more. When not drawing comics, Brett is hanging out with his family, eating pizza and working on their old house.

Karl Stock has written Tharg's Future Shocks for 2000AD, Dredd prose fiction for the Judge Dredd Megazine and strips including Sniper Elite and Death Wish for Rebellion titles such as Battle, The Vigilant and Cor! & Buster, as well as interviews and features about comics for the Judge Dredd Megazine, Tripwire, Comic Heroes and more. He is the co-author of the 40th anniversary edition of Thrill-Power Overload, 2000AD's official history, and lives in Scotland.

Tom Newell, 34, is an illustrator, designer and comic artist from the West Midlands, UK. His many influences include Simon Bisley, John Buscema and Sean Gordon Murphy. In 2016 Tom decided to take learning to draw seriously and joined a university comic art course, with the single goal in mind of one day to be a successful comic artist. For the last year Tom has worked closely with UK based comic artist John Charles, on his creator owned project, Technofreak.

Rory McConville is an Irish writer living in London. He has written several series for 2000 AD including Judge Dredd and Department K, and also co-created the historical graphic novel Big Jim: Jim Larkin and the 1913 Lockout. His most recent work includes the graphic novel Write It In Blood for Image Comics.

Paul J. Holden has illustrated The 86ers, Judge Dredd, Tharg’s Future Shocks, Rogue Trooper and Johnny Woo for 2000 AD and the Judge Dredd Megazine. P.J. lives and works in Belfast, and is married with two children.

Liam Johnson is a comics writer and winner of 2000 AD's 2019 Talent Search, whose credits include Future Shocks and Venus Bluegenes (for 2000 AD) and Missing Persons (for Markosia). He also writes for television, including a number of credits for ITV's Emmerdale.

Paul Cornell is perhaps better-known as a Doctor Who writer than as a comics scribe, having created a host of novels based on the popular British sci-fi character, as well as screenwriting the highly-regarded Who episode ‘Father’s Day’. His debut in the Megazine came with the Pan-African Judges series, shortly followed up by Deathwatch. Following a lengthy Who-related hiatus, Cornell returned with the dinosaur apocalypse saga XTNCT. He is now working for Marvel on their Wisdom series, has contributed episodes to BBC’s Robin Hood and has published two novels British Summertime and Something More.

Anna graduated from Leeds Arts University in 2020 with a degree in Illustration. After emerging from the small press comics scene, this is her professional debut in comics.
"The joy of Regened is that it’s a proper all-ages thing, something for young and old" - Comicon.com