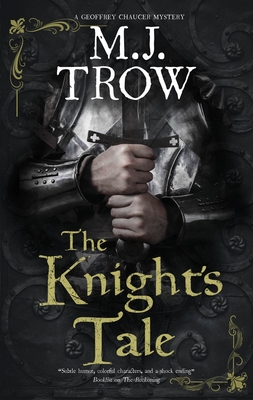 April, 1380. About to set off on his annual pilgrimage, Comptroller of the King's Woollens and court poet Geoffrey Chaucer is forced to abandon his plans following an appeal for help from an old friend. The Duke of Clarence, Chaucer's former guardian, has been found dead in his bed at his Suffolk castle, his bedroom door locked and bolted from the inside. The man who found him, Sir Richard Glanville, suspects foul play and has asked Chaucer to investigate. On arrival at Clare Castle, Chaucer finds his childhood home rife with bitter rivalries, ill-advised love affairs and dangerous secrets. As he questions the castle's inhabitants, it becomes clear that more than one member of the Duke's household had reason to wish him ill. But who among them is a cold-hearted killer? It's up to Chaucer, with his sharp wits and eye for detail, to root out the evil within.
M J Trow is a military historian by training and the author of the long-running Inspector Lestrade and 'Mad Max' Maxwell detective series, as well as the Kit Marlowe Tudor mysteries and the Grand & Batchelor Victorian mystery series. He lives on the Isle of Wight.