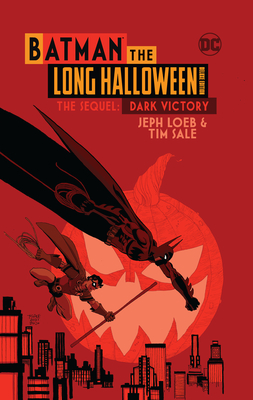 
Not On Our Shelves—Ships in 1-5 Days
Set in early days of the Dark Knight's career, Batman must stop the elusive cop killer "Hangman" before the murderer strikes again. A children's game pinned to each of the victims is the only clue to the Hangman's identity.

A rogues gallery of villains are prime suspects—Two Face, the Joker, the Riddler, Catwoman.

In order to solve this crime, Batman must look to a most unexepcted place:

An orphaned boy who will change his life forever.

They will be known as Batman and Robin, and this is their story.

Batman: The Long Halloween: Dark Victory: The Deluxe Edition is a stunning murder mystery from the iconic team of Jeph Loeb and Tim Sale collecting the entire series Batman: Dark Victory #1-13 and Batman: Dark Victory (New Edition).
Jeph Loeb is an Emmy Award-nominated and Eisner Award-winning writer/producer living in Los Angeles. In television, his many credits include Smallville, Lost, and Heroes, and in film, Teen Wolf and Commando. In comics, he is best known for his work with the supremely talented artist and partner-in-crime Tim Sale on Batman: The Long Halloween, Superman for All Seasons, and Catwoman: When in Rome for DC as well as Daredevil Yellow, Spider-Man Blue, and Hulk Gray for Marvel.

Tim Sale is the Eisner Award-winning artist of Batman: The Long Halloween, Superman for All Seasons, Hulk: Gray, and more. His art was prominently featured on the hit NBC series Heroes.