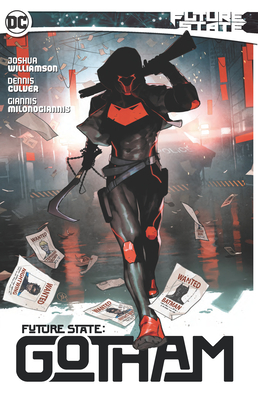 
In Stock—Click for Locations
The event that was DC Future State continues in this graphic novel collection starring the Red Hood and the entire Bat-Family.


Disaster strikes Gotham City, and all evidence points to the Next Batman! Red Hood must choose justice over his family and allies when the corrupt Magistrate enlists him to bring in the new Batman dead or alive! Featuring the entire cast from the popular Future State Batman titles, this story line kicks off the next chapter in this forbidding world of tomorrow, and does so in brilliant, monochromatic storytelling! This black-and-white collection will showcase the brutal world that's around the corner in Future State Gotham!

Joshua Williamson lives in Portland, Oregon. His career as a comics writer kicked off in 2007, and since then he has done a number of books for Shadowline, Image, Desperado Publishing, Kick Start, and DC Comics. He has written the Uncharted limited series based on the bestselling video game, Voodoo, and Marvel's Illuminati and Red Skull. He is currently writing The Flash and Batman/Superman for DC Comics.