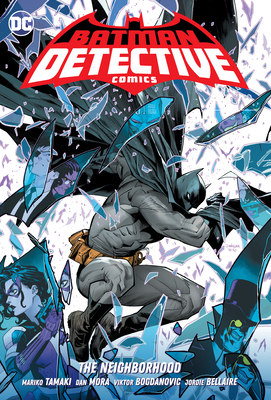 
Not On Our Shelves—Ships in 1-5 Days
With the loss of his fortune and manor, the election of Mayor Nakano, and the growing anti-vigilante sentiment in Gotham, Bruce Wayne must rethink how to be Batman...or risk being left behind by his own city.


Introducing Mr. Worth! When his daughter is killed during the brutal crime wave gripping Gotham City, eight-foot-tall stack of muscle and money Roland Worth sets out on a path of revenge toward the prime suspect in the crime: Batman! The Dark Knight has been framed for murder, and to make matters worse, this grisly deed seems to be connected to yet another emerging villainous force on the horizon. It’s a rogues gallery explosion, and this time there’s no mansion on the hill for Bruce Wayne to mount his counterattack from! Eisner Award-winning writer Mariko Tamaki and superstar artist Dan Mora begin an exciting, surprising, and death-defying new story for the World’s Greatest Detective.

Mariko Tamaki is a Canadian writer living in Oakland. Works include New York Times bestseller This One Summer and Skim with Jillian Tamaki, Emiko Superstar with Steve Rolston, and the YA novel (You) Set Me on Fire. This One Summer was the winner of Printz and Caldecott Honors in 2015 and received the Eisner Award for Best Graphic Album (New).