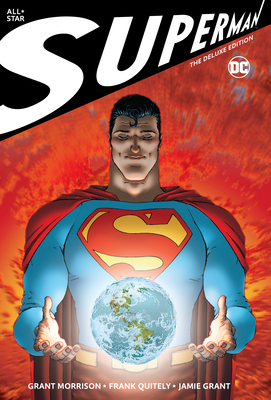 
Backordered
With heartfelt nods and winks to legendary tales, writer Grant Morrison and artist Frank Quitely remind us why Superman is the most renowned character in comic book mythology in this deluxe edition.


ADVENTURES OF SUPERMAN! Topsy-turvy madness on the backwards Bizarro planet. A bottled city that proves you can never go home again. A living sun hell-bent on destroying humanity. A world without the Man of Steel. Twelve impossible labors and mere moments to save the Earth.

The multiple-award winning ALL-STAR SUPERMAN is an eternal story true to the greatest character from the golden age of comics. Witness the timeless icon—the Man of Steel—in action in this deluxe collection of excitement and acclaim.

Writer Grant Morrison is known for his innovative work on comics from the graphic novel Arkham Asylum to acclaimed runs on Animal Man and Doom Patrol, as well as his subversive creator-owned titles such as The Invisibles, Seaguy, and WE3. Grant has also written best-selling runs on JLA, Seven Soldiers of Victory, and New X-Men, and helped to reinvent the DC Universe in The Multiversity, All Star Superman, 52, Batman, Batman & Robin and Batman, Inc.

Frank Quitely was born in Glasgow in 1968. Some of his most notable work has been for DC Comics/Vertigo, including Flex Mentallo, Batman: The Scottish Connection, The Kingdom: Offspring, JLA: Earth 2, The Invisibles, Transmetropolitan, The Authority, The Sandman: Endless Nights, WE3, All-Star Superman and Batman & Robin. For Marvel Comics, he's worked on New X-Men with frequent collaborator Grant Morrison. He is also a sought-after covers artist, having drawn for Negative Burn, Judge Dredd Megazine, Classic 2000 AD, Jonah Hex, Books of Magick: Life During Wartime, Bite Club, American Virgin and All-Star Batman. He lives in Glasgow with his wife and three children.