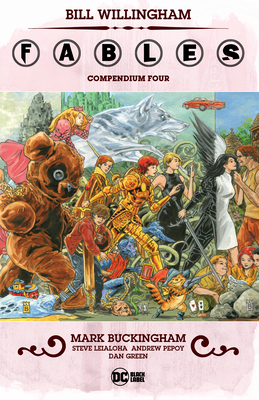 
Not On Our Shelves—Ships in 1-5 Days
Explore Bill Willingham's acclaimed, Eisner Award-winning series Fables to the very end in this final compendium volume!

With Castle Dark now back in the hands of the Fables, mysteries both young and old begin to challenge the residents of Fabletown. Bigsby and Stinky set off from Fabletown in Rose Red's blood-fueled sports car to track down the two abducted cubs. Unfortunately for Snow White, besides suffering the trauma of having two of her cubs go missing, a long forgotten secret uncovered in Castle Dark threatens to sabatoge her and Bigsby's marriage.

Contains: Fables #114-149
Bill Willingham has been writing, and sometimes drawing, comics for more than 20 years. During that time he's had work published by nearly every comics publisher in the business, and he's created many critically acclaimed comic book series, including ELEMENTALS, COVENTRY, PROPOSITION PLAYER, and FABLES. His work has been nominated for many awards, including the Eisner, Harvey, and Ignatz comics industry awards and the International Horror Guild Award.