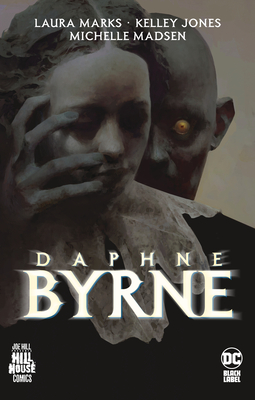 
In Stock—Click for Locations
The voice from beyond the veil...

In the gaslit splendor of late-19th-century New York, rage builds inside 14-year-old Daphne. The sudden death of her father has left her alone with her grief-stricken mother. Emotionally adrift and living outside her means, the widow becomes easy prey for a group of occultists promising to contact her dead husband.

While fighting to disentangle her mother from these charlatans, Daphne experiences a genuine supernatural encounter--a strange, insidious presence in her own body. "Brother," a charming entity with unspeakable appetites, visits her in her dreams and whispers in her ear. Soon, Daphne is sharing his terrifying power.

A demon? A ghost? Her own hallucination? Daphne can't be sure what Brother is or what he wants. And even if she knew, could she stop him? Would she want to?

An unsettling, blood-soaked tale from writer Laura Marks (The Good Fight) and artist Kelley Jones (Batman, The Sandman), Daphne Byrne is part of DC's smash-hit Hill House Comics library, curated by Joe Hill (NOS4A2, Locke & Key). Collects the full six-issue miniseries as well as commentary and behind-the-scenes artwork.
Laura Marks is a television writer and multiple award-winning playwright whose on-screen credits include The Good Fight, The Expanse, The Exorcist, BrainDead, and Ray Donovan. Her plays Bethany and Mine have garnered acclaim from critics and been published and produced across the US and overseas. A graduate of Juilliard's playwriting program, she lives in New York City.