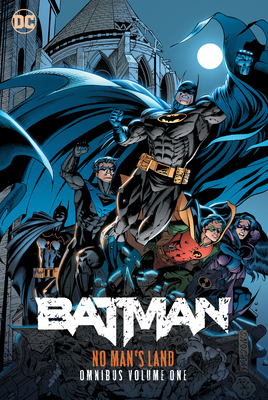 
Not On Our Shelves—Ships in 1-5 Days
The monumental crossover event that changed Gotham City and the Dark Knight forever collected in one volume for the first time.


After suffering a cataclysmic earthquake, the U.S. government has deemed Gotham City uninhabitable and ordered all citizens to leave. It is now months later and those that have refused to vacate 'No Man's Land' live amidst a citywide turf war in which the strongest prey on the weak.  Batman and his allies including the enigmatic new Batgirl, Nightwing, Oracle and Robin must fight to save Gotham during its darkest hour and return Justice to the destroyed city.

Bob Gale is an Oscar-nominated Screenwriter-Producer-Director, best known as co-creator, co-writer and co-producer of "Back to the Future" and its sequels.  Gale was born and raised in suburban St. Louis, Missouri, where he attended public high school. He then moved to Los Angeles to major in cinema at the University of Southern California. He has written or co-written over 30 screenplays.  His other film credits include "1941," "I Wanna Hold Your Hand," "Used Cars," and "Interstate 60," which he also directed.  His darker side is clearly seen in his 2013 novel "Retribution High," as well as the 1992 movie "Trespass," which he co-authored, and in his episode of "Tales From The Crypt," “House of Horror,” which he wrote and directed.  Gale has also written comic books, most notably issues of Spider-Man, Batman and Daredevil, thus proving to his father that he did not waste hours and hours reading comics in his youth.  He lives in Southern California with his wife and their dog, and he still roots for the St. Louis Cardinals.


Greg Rucka is a novelist whose work on Batman brought fresh attention to the character and to the inhabitants of Gotham City. He won the Eisner Award for Best Story with GOTHAM CENTRAL's "Half a Life." His other DC credits include ACTION COMICS, ADVENTURES OF SUPERMAN, WONDER WOMAN, the new Batwoman adventures in DETECTIVE COMICS and SUPERMAN: WORLD OF NEW KRYPTON. He was one of the co-writers of DC's weekly series 52. As a novelist, Rucka has nearly a dozen books to his credit, including the recent Walking Dead (Bantam). His graphic novel series Whiteout is the inspiration for the September 2009 movie of the same name.